2022 has seen inflation become a global problem, with readings north of 10% seen in Europe and the UK. Central bankers are still haunted by the ghosts of the 70s – energy price shocks and spiralling wage demands. Persistent inflation caused ‘stop, go’ monetary policy measures that discredited their ability to effectively manage the economy.  With this in mind, policymakers have embarked on a sequence of monetary tightening measures far more intense than any seen in the last few decades. They hope that by dealing with inflation properly the first time, it won’t linger in the expectations of labour markets and cause average inflation to overshoot targets for a prolonged period.

This tightening of monetary policy is mainly achieved by increasing the ‘base rate’, which is the rate of interest central banks both charge commercial banks to borrow from them and pays to commercial banks who hold reserves with them. The base rate sets a floor on interest rates and is used to price other interest rates, such as variable mortgages – whereby the mortgage rates are calculated as a spread on top of the base rate.

Increased mortgage rates cause borrowers to rethink their plans, for instance whether to purchase a first property or to move houses. This puts downward pressure on the mortgage market, which feeds through to the overall property market where this shows up as falls in the overall numbers of houses sold and eventually in falling house prices.

As the number of houses sold falls, property developers tend to scale back their future construction plans. The construction sector is a key part of economic activity and importantly is a large employer, meaning that when it scales back, this results in job losses. This has a domino effect – with more of the workforce unemployed, there will be a fall in demand for other goods and services. For example, a café situated next to a building site may consequently see a fall in their daily sales. This results in the café letting go of a member of staff in order to cut costs. This, again, has a domino effect meaning the unemployed individual will spend less, and so on. Ultimately, this negatively impacts across the economy as a whole. It is through this mechanism that the property sector makes a big impact on the economy and drives a large part of the cyclicality within it. We can therefore expect the economy to suffer a headwind sometime after the property sector begins to slow. There is also the impact on individuals’ wealth through the falling house prices, so even if they do not intend to move – the feeling of lost wealth could cause a loss of desire to consume goods and services. This may incentivise individuals to save more to counter the feeling of ‘lost’ wealth. Check out our sister company, Savings Champion’s ‘Best Buy’ tables to see the best accounts to return the best cash savings.

In this article we will look at both the UK and US housing markets, with both sitting in similar positions, although the decline in the US market seems to be a few months ahead of the UK market. 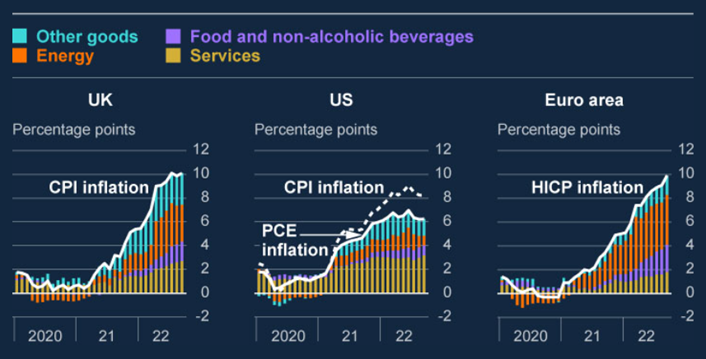 Increases in energy, food and transport (a large component of the services category) have driven inflation across the world (see Figure 1.). The war in Ukraine has constricted energy and food supplies, causing price rises. In the UK food prices are up 14.6% year on year, transportation is up 10.9% year on year while the price of furniture and household goods has risen 10.8% compared with last year. 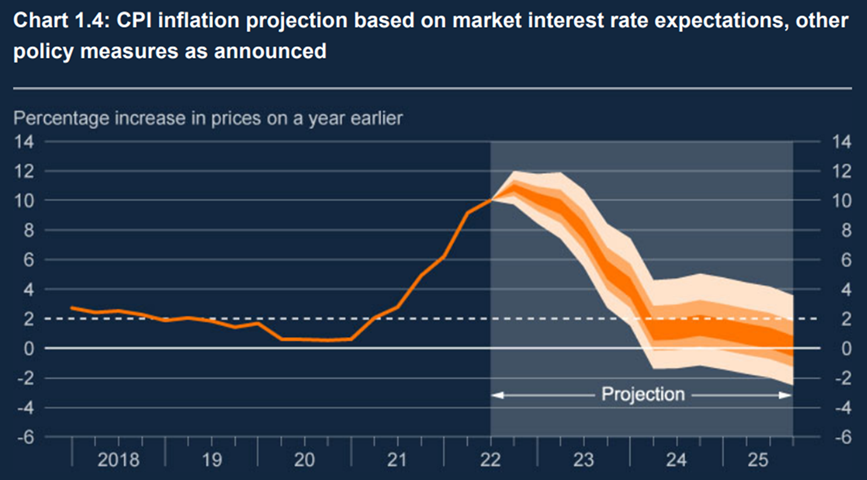 While this has been painful, there is some cause for hope as the Bank of England (BoE) projects inflation to fall steadily, as per the projection shown in the above graph, and by the end of 2023 to be close to the 2% target (see Figure 2.).

UK interest rates are shown to have increased significantly since November 2021 when the BoE began to raise rates in an attempt to reduce the inflationary pressures in the economy. The latest hike of 0.75% (2.25% to 3%) is the largest increase in 30 years, however, one should hope that rates are still low by historical standards (see Figure 3a.)

This is also not localised to the UK where we have seen other Central Banks such as the Federal Reserve increase interest rates. US interest rates were increased by 0.75% to 3.75%-4% which is the highest rate observed since 2008 (see Figure 3b.).

Markets are forward-looking, and so don’t price interest rates based on the prevailing base rate if they expect it to rise in the near-future. Markets have been expecting UK base rates to peak at c. 5% (from the present level of 3%), however this is down from the 6% expected during the mini-budget crisis (see Figure 4.).

Figure 4. highlights how expectations for the peak of the base rate have changed over the previous 3 months. As mentioned, UK rates have fallen back, and this has helped the mortgage market. At the peak of the mini-budget crisis, when expectations of the future base rate were at around 6%, mortgage lenders were withdrawing from the market.  However now that base rate expectations have fallen and become more stable, mortgage lenders have returned to the market, which should keep the UK property market more orderly.

As mortgage rates have risen this has impacted the mortgage market. 2021 saw mortgage rates at historical lows. In both the UK and US this spurred a wave of refinancing (remortgaging), with existing mortgage holders locking in lower rates while they could.

In the UK this picked up heavily in Q3 and Q4 of 2021, while in the US it was strong throughout 2020 and 2021. 70% of US mortgages by value are 30-year fixed-rate mortgages, while another 9% are 15-year fixed-rate mortgages. This means that those who locked in rates below the present 7% will be heavily discouraged from refinancing and new buyers will be priced out of taking new mortgages both of which impact the demand for new houses (Figure 6.). 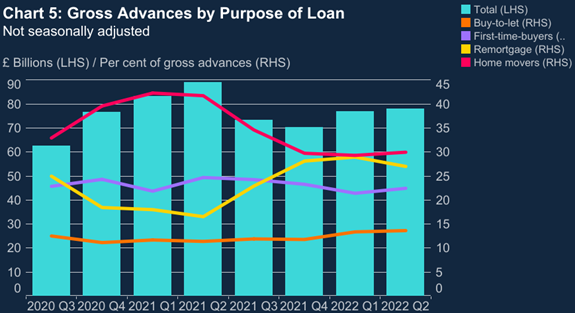 The BoE’s data on purposes of mortgage loans shows a swift fall in the value of mortgages for home movers (see Figure 7.). Home moving was particularly high in 2021 due to substantially lower mortgage rates in combination with the embrace of ‘Work From Home’, allowing commuters to move further out of the city to more spacious homes. As there are fewer homeowners moving, there is a reduction to the number of properties up for sale, meaning the supply of homes for sale has fallen. 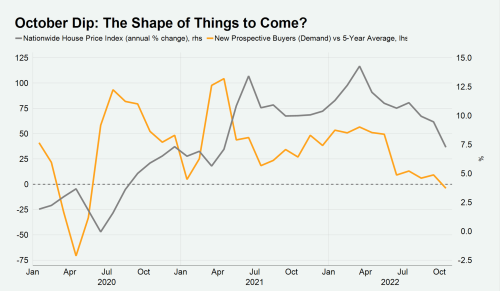 As both demand and supply for property has fallen, the volume in the property market (number of homes sold) has fallen substantially. In the UK property market volume fell 37% in September 2022 when compared with 2021, on a seasonally adjusted basis. Similar falls in US property volumes both with respect to existing and new home sales (see Figures 9a. and 9b.).

Falls in property volume tend to be followed by falls in prices. In the US, house prices have been falling since June, while in the UK house prices have been falling since September (see Figure 10). The falls have been relatively small so far and differ from the ‘collapse’ seen in 2008 – the same dynamics are not at play.  For instance, leading up to 2008, US mortgages were often granted with no checks on income or ability to repay.

While house prices have begun to cool off, some perspective is necessary.  Although property volume has fallen in the last 12 months, US house prices have still risen 13.3% compared with the same time last year and UK house prices are up 8%. Home owners are still in considerable positive net equity. 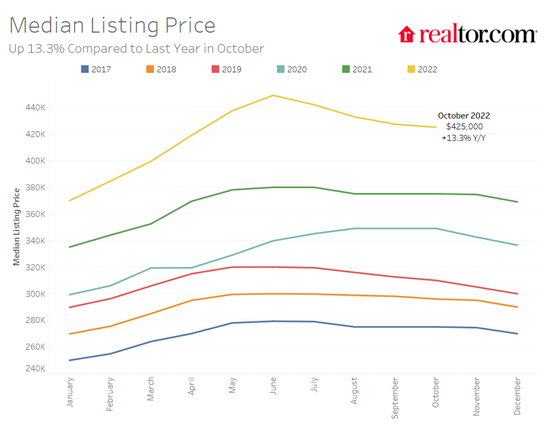 As the housing market slows, property developers slow down their construction plans. The US housing cycle seems to be a few months further ahead of the UK, but more contemporaneous and forward-looking data points to a similar slowdown in the UK (see Figure 12).

UK new home starts data is only available until Q2 2022, but the Manufacturing PMI (a survey by S&P that gauges the health of the construction industry) showed that in September the construction industry was still in growth.  However, survey participants indicated concern over the outlook for the next 12 months, with “the degree of confidence towards the business outlook dropped to its lowest for over two years in September”. Additionally; “survey respondents often commented on a strong pipeline of outstanding work, but incoming new orders remained relatively scarce in September”. From this we can deduce that developers are completing their current order books of work, but that their pipelines of new work are thinning, and so new home starts in the UK are likely to go in the same direction as those of the US.

Figure 13. shows US data, with new home starts in red, building permits granted in green and recessionary periods shaded grey. What is shown is that housing starts tend to move in line with permits granted (analogous to UK planning applications) and that these begin to slow down well before a recession, with the implication that slowdowns in the property sector are likely contributing to a large part of the slowdown. This shows the importance of the property sector to the cyclicality of the economy – if the property market begins to slowdown, it is likely that a recession will occur in the not-so-distant future.

The impact of rising mortgage rates on households

While a slowing property market is likely to pull economic activity down and so reduce household incomes indirectly, rises in mortgage rates also have a direct impact on households’ disposable incomes. 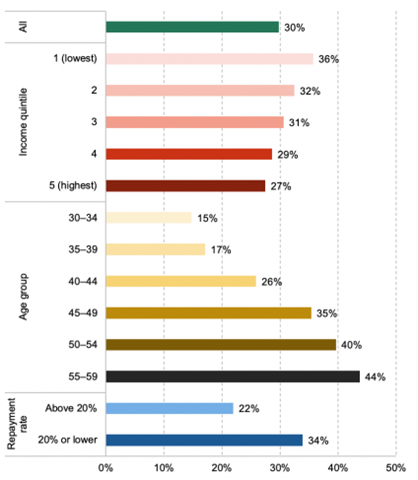 The mortgage rate rising so rapidly will have a significant impact on the spending power of homeowners, specifically where mortgage payments are a significant proportion of their disposable income. This tends to impact the lower income groups.

Figure 15 shows the percentage of each income quintile that will have to spend 20% or more of their income on mortgage repayments. We should also remember that these households will also be struggling with much higher food and energy bills, leaving relatively little for discretionary consumption. The BoE has hit the 3% mark for the base rate, corresponding to the ‘2.50 ppt increase’ in the graph. Should the BoE increase rates further, as they have stated is their intention, an even greater share will be spending 20% of their incomes on mortgage repayments. It is likely that this will push the proportion above the levels seen in 2007-2008. 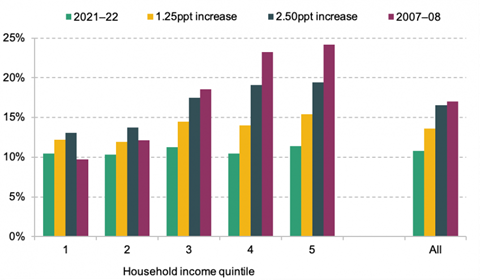 So it seems that the housing markets in the UK and US are in for a tough time, and this will have a knock-on impact on economic activity in both economies. Much depends on the path of interest rates and these in turn will depend on how quickly inflation falls and the resolve of the monetary authorities to fight it.

If you are worried about the affect inflation could have on your portfolio, get in touch with your adviser or, if you're looking to get started and have £100k or more in investable assets, arrange a free consultation.

Note: This Market update is for general information only, does not constitute individual advice and should not be used to inform financial decisions. Additionally, past performance is not a guide to future returns.