Doves vs Hawks is all the chatter

Central Bank policy and inflation continues to be the focus for investors. The broad theme of the world economy reopening remains with increases in social mobility and holidays, however increasing inflation from non-demand factors such as supply chain disruptions have posed a challenge to Central Banks.

The impact of inflation

As the 1970’s showed there can be inflation without economic growth.

Historically in periods of low inflation and high economic activity this leads to equities and corporate debt outperforming meanwhile government bonds tend to lag as investors are happy to take risk with their investments (see Figure 1.) 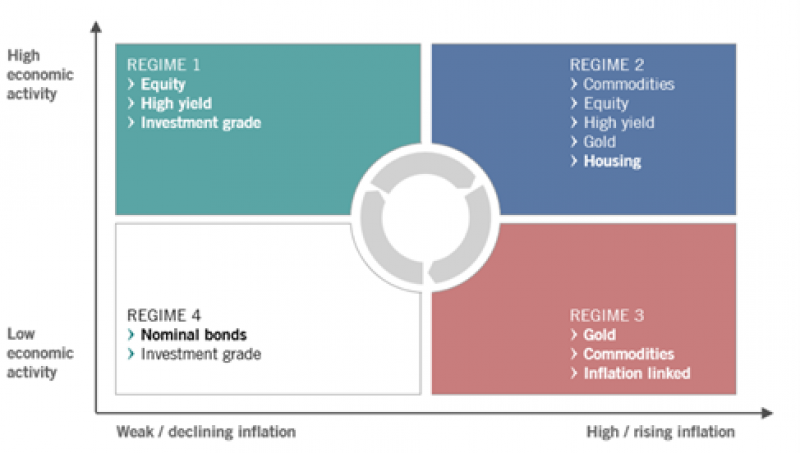 Based on current inflation figures and forecasts, we are now in a regime of high inflation and high economic activity. In this environment one would still consider equities, corporate debt (especially high yield), property and infrastructure as sectors that will have revenue linked to inflation, which should reduce the impact of future cash flows being eroded by inflation and keep values up.

Where is inflation and where it may go?

We continue to see inflation rising in developed markets along with pockets of inflation in some emerging markets.

One reason for this is the continued mismatch in supply and demand – the combination of increased demand from economies reopening and the pandemic induced supply chain disruption has led to rising costs which companies have begun to pass onto consumers.

An increase in energy prices (especially given the low-price base coming into the pandemic) has also been an inflationary pressure. We do not see this structural change however, as commodity prices historically go through peaks and troughs in line with supply and demand requirements.

Moving forward the outlook is that inflation is expected to remain high but that the growth rate in inflation will fall in 2022 (see Figure 2.). This has been a consistent view over the last six months and is based on that we expect to see a normalisation as economies reopen, furlough schemes end and that supply disruptions will improve. 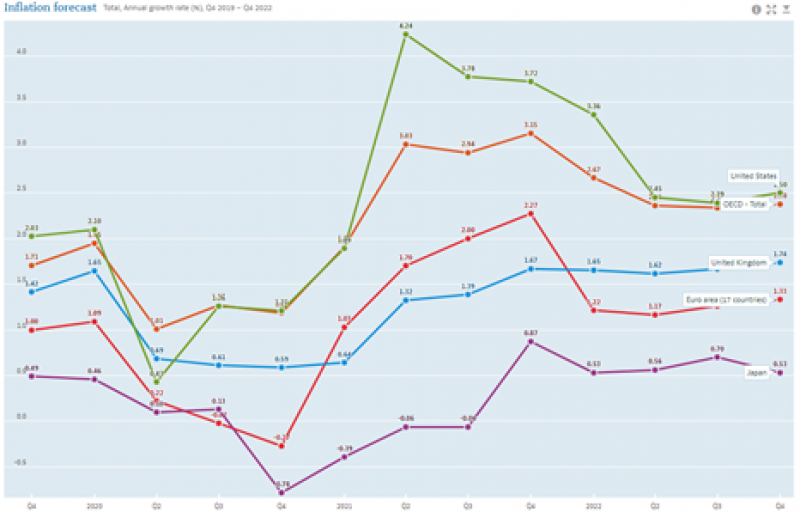 It wasn’t that long ago when investors were concerned about deflation and stagnating productivity. Fast forward to the present day and the biggest risks we now perceive are policy mistakes from Central Banks.

To date Central Banks have been extremely measured in the way they communicate potential policy actions to the market.

Federal Reserve Chair Powell, for example, when announcing the potential tapering of asset purchase was clear to state that if economic conditions deteriorate then the Federal Reserve would not hesitate to step in. To date this has provided a degree of assurance for investors, but for now the conversation turns to interest rates and will Central Banks raise them or not.

The direction of the Federal Reserve is clear, but we still see a wide range of forecasts on what any interest rate rise will be. The most hawkish forecasts expect rates to rise to 0.75% in 2022 and 1.75% by 2023 and the more dovish who see rates staying at the lower bound and this is reflected in current market uncertainty.

Turning to the BoE though we see a different strategy being discussed. Whereas the Federal Reserve are looking to taper first and raise rates later, the BoE have been looking at perhaps increasing rates in two increments to 0.50%, with the first-rate rise occurring as soon as December. Raising rates to 0.25% would still mean rates are low by historical standards, but it’s the market interpretation that needs to be considered and what further tightening from the BoE would mean.

A tight labour market, continued disruption to supply chains and increasing energy costs has seen inflation continue to rise. This has led to the Bank of England’s (BoE) Governor Andrew Bailey supported by new Chief Economist Huw Pill to express concerns about inflation being above the banks 2% target and that an interest rate rise may occur as soon as this year.

Markets were supported by the news that Congress had approved an increase to the Government’s borrowing limit which alleviated immediate concerns that the US would default – the increase of $480bn however is only temporary and further talks are expected in December.

Economic data coming out of the US in September was mixed. Average hourly earnings were higher than forecasted increasing 0.6% and weekly jobless claims fell more than expected, however nonfarm payroll was well below expectations (500,000) at 194,000.

The ECB have announced that they will begin to reduce their asset purchase program, although there are mixed views coming from policy officials on the inflation outlook. ECB President Lagarde has expressed a desire to not overreact to what may be transitory supply chain disruption and increases to energy prices, however Chief Economist Lane believes that inflation will hit 2% by 2025 in the Eurozone and that the EU is experiencing more persistent inflation.

The fallout of Evergrande and the wider condition of the property sector remains a focus for investors. There are several key bond payments due from Chinese property companies due in the coming weeks and any default is likely to cause further volatility in equity markets as the property sector accounts for around a quarter of the Chinese economy.