Recession - the US sneezes and the world catches a cold

Much of the focus of investors has been on the increasing likelihood of a recession, and they are now trying to figure out what this will mean for Central Bank policy, inflation, and financial market performance.

This creates a situation in which bad news could be good news. At first glance, it appears counterintuitive that a slowing economy could be 'good' for markets but allow me to explain without resorting to the truism that 'the economy is not the market, and the market is not the economy.'

A higher probability of recession means that a country's GDP (the value of the goods and services produced) is expected to fall. This limits Central Banks' ability to raise interest rates, resulting in lower financing costs for companies which means there will be less pressure on their cashflows as debt is cheaper. In this update we will look at the topic of recession, what this actually means, and what we can do moving forward.

What is a recession?

Some of you may be familiar with the business cycle model (see Figure 1.) - the idea that a country's GDP will fluctuate between periods of expansion and contraction. This is not a new finding; there is clear evidence of periodicity in economic activity dating back to the 1850s, and while the respective periods are not symmetrical in terms of duration or magnitude, it is normal for a country's economic activity to accelerate and decelerate. 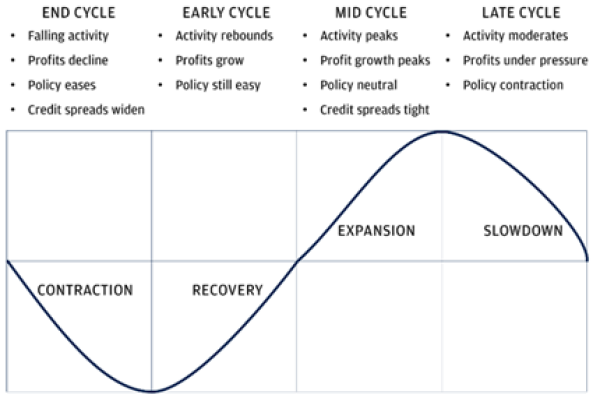 What we can see is that each period has general characteristics that investors can use to predict where we are in the business cycle, but no recession is the same. This is exacerbated by the fact that there is no universal (singular) definition of what a recession is or more specifically when a recession has started.

Recession is an emotive term but it is  a normal feature of market cycles. It’s important to keep a level head and assess  why economic growth is slowing.

Are we in a recession?

A lot of the recessionary debate has centered on the US and to paraphrase  the Austrian politician Metternich “when the US sneezes the world catches a cold”, I thought it would be relevant to look at the US economy in more detail.

One definition of a recession is a country experiencing two consecutive negative quarters of real GDP and with the recent Q2 GDP figures showing the US economy contracting by 0.9 percent this meant the economy was in a technical recession following the Q1 contraction of 1.6 percent (see Figure 2.)

Another indicator of whether the US economy is in a recession is when the National Bureau of Economic Research (NBER) declares it to be the case! The NBER takes a more holistic approach than the aforementioned technical recession by assessing several economic indicators to assess whether there has been a significant slowdown in economic activity.

At the time of writing the NBER had yet  to declare the US to be in a recession. For instance, certain parts of the US economy remain robust and certain recent data does not suggest structural weakness.

For example, we saw a decline in GDP but when you consider the components of GDP we observe that the biggest detractor was a fall in private inventory investment. Should this persist then it could indicate a more prolonged slowdown in business activity. However, supply chain disruption which altered business inventory spending might be a more rational explanation for this fall than a current recession!

Moreover, Private Consumption Expenditure (PCE) was positive and  US consumers were spending more on Services. Th is evidence of the health of the US consumer as disposable income is also at a 12-month high. There has not been material degradation in US consumer credit i.e. consumer credit card balances are not at elevated levels and there has been no marked increase in credit defaults. Robust consumer health is normally driven by strong labour markets, and we can see this quite evidently in the US where the unemployment rate is down to pre-pandemic levels and currently at 3.5% (Figure 3.). The decline in unemployment has been precipitous and has led to higher wage growth in most sectors and has incentivized higher labour mobility as individuals are more willing to move jobs. 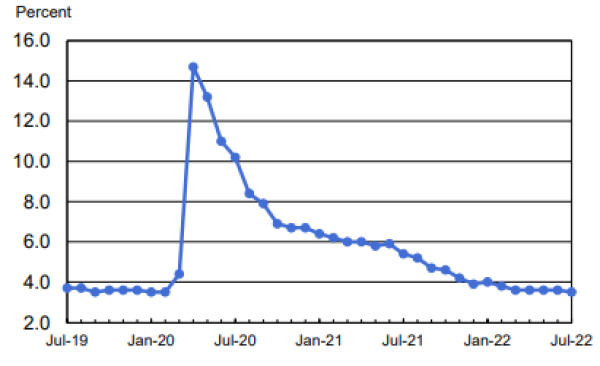 We know that labour participation (the number of individuals in the workforce) fell post pandemic and the reopening of the economy created a labour shortage relative to the increase in demand which in turn led to an increase in wages.

This has potentially significant implications given that the Chair of the Federal Reserve, Jerome Powell frequently cites the labour market's strength as justification for further interest rate rises.

However, will this increase in wage growth attract people back into the workforce, alleviating some of the labour market tightness and potentially leading to less aggressive interest rate policy? Alternatively, this could be an indicator of a structural problem in the US labour market, such as a lack of qualified workers, implying that the trend of elevated wages could continue and give the Federal Reserve justification to raise interest rates further.

The recent period has shown that the only certainty is that there is no certainty, so it would be foolish to say what will happen in markets over the next few days and weeks. In times like this I defer to context - what am I looking to achieve and does the matter before me impact that objective?

In the context of investing, it has been widely shown that disinvesting in times of market stress and panic has been an unsuccessful strategy. I’ve covered this topic in previous commentary pieces, but the rally in the performance of equities last month illustrates the impact of missing out on a few trading days. In summary, remember why you invested in the first instance and what your long term objectives are. If you are in any doubt, please seek financial advice.