A world of debt is designed for inflation

The global financial crisis (GFC) of 2008 resulted from stress in the banking sector that was ultimately caused by too much debt. It risked a catastrophic loss of money supply as the system threatened to stop working. This would have, in turn, caused a loss in economic activity that could have plunged the world into a deep depression the like of which would have made the Great depression look like a blip!

In those desperate times it was only the intervention of governments and monetary authorities that saved the day by stepping in with stimulus, flooding the world with cheap money. But this support was not funded, nor has it been paid back since. The uncomfortable irony is that we saved ourselves from a debt crisis with more debt and it has reached such a point now that we rely on debt being cheap to enable us to keep the cycle going.

When inflation is a good thing

The twelve years prior to the emergence of COVID-19 might not have seemed it, but it was a period of economic certainty. Built on low interest rates and the absence of inflation we got used to low and predictable economic growth. That period was one of the longest, yet slowest recoveries on record.

Although that was not the world that policy-makers had intended to create when they began to pump money into the system in the dark days of 2008. They had instead thought that their actions would create enough economic activity to drive prices higher as the world recovered at a more usual pace.

If our solution to a debt crisis was to be more debt, then the solution to more debt was to be inflation since inflation erodes the real burden of debt. During a period of rising prices due to demand led economic growth it is reasonable to believe that revenues rise and workers will eventually want higher wages. If what you earn is going up but what you owe is not then the burden of your debt is falling, assuming the cost of servicing your debt is not rising faster than what you earn. So in this respect, inflation is a good thing.

Unfortunately, the level of debt that has been needed to support economic growth in the post global financial crisis period has been rising and in the absence of inflation authorities have had to keep the cost of debt low to ensure that we can afford to take on even more debt.

In fact, in their desire to create enough growth to cause inflation, the authorities have not stopped at nothing and by this, we mean zero.

Until recently, over $17trn of debt globally stood at a yield of less than zero. Negative rates do not make much sense to the man in the street since it relies on the logic that it is a good idea to lend someone money now for the guarantee of getting less back in the future. Which clearly is not sustainable, but it has been just another mechanism in the effort to create a self-sustaining recovery that is strong enough to create lasting inflation.

So, we entered 2020 ready to reload the policy of spending beyond our means in the hope that growth will one day help inflation wash away the ever-building burden of our collective debts.

Confident in the knowledge that if this wasn’t the year for that to happen then the authorities had already amassed too much debt to risk taking away the punch bowl of low interest rates. Comfortable also with the fact that yet another year of this was probably going to be good for asset prices as had so many others years been since the global financial crisis.

Then came the COVID-19 pandemic. An event of horrible human consequences both in terms of loss of life and curtailment of freedom.

It has been the latter that has wreaked havoc on economic activity. To say that this is a nightmare for a world of debt and deficit where growth had not yet reached escape velocity is an understatement. If pumping money into the system was almost a lifestyle reaction to the crisis of 2008 then doing the same in 2020 was more the result of habit and necessity.

This time around the authorities reacted to the rapid reduction in activity much quicker and applied the equivalent stimulus from the entire global financial crisis period in just a matter of months. The level of support has seen government borrowing balloon to levels not seen before in peacetime, as the chart below illustrates for the US.

Now as we see light at the end of tunnel, caused by the vaccination programme, it is highly unlikely that the support will be removed quickly, and so debt levels are forecast to keep rising. 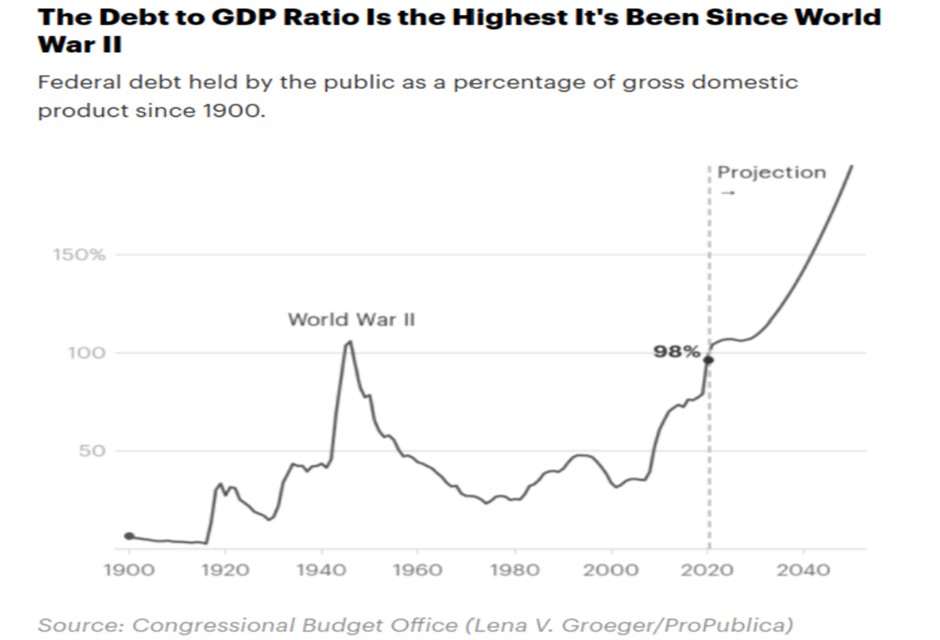 We know what we have just said flies in the face of accepted wisdom that if you borrow then you have to pay it back.

There can be no doubt that, at some point, and across the developed world, taxation will have to rise to pay for some of this ballooning debt but without inflation it seems unlikely that it will ever be totally repaid.

Even during the years of austerity here in the UK, after the global financial crisis, we did not actually reduce our debt burden. To do that would have meant increasing taxes beyond the point it would have negatively impacted economic growth and there wasn’t enough of that around already.

The same will be true in the period post-pandemic. Although we need to raise taxes, we won’t risk that too early because it will slow the recovery and might ultimately threaten it. So we will enter the recovery phase in the second half of 2021 with the stimulus taps firmly and almost permanently fixed to on.

A by-product of asking people to stay at home has been that they move some of their spending online but for various reasons the rate that we save at has risen markedly during the last year.

Perhaps this is, in part, due to lack of opportunity as venues in the hospitality sectors remain closed. Or it could be due to a lack of confidence to spend whilst there is uncertainty.

However, as the world begins to open up and confidence begins to return, it is reasonable to assume that some of these additional savings will be spent on newly available retail opportunities.

The chart on the left below was taken from the last Bank of England monetary report and shows how significant the level of saving has been since March 2020. 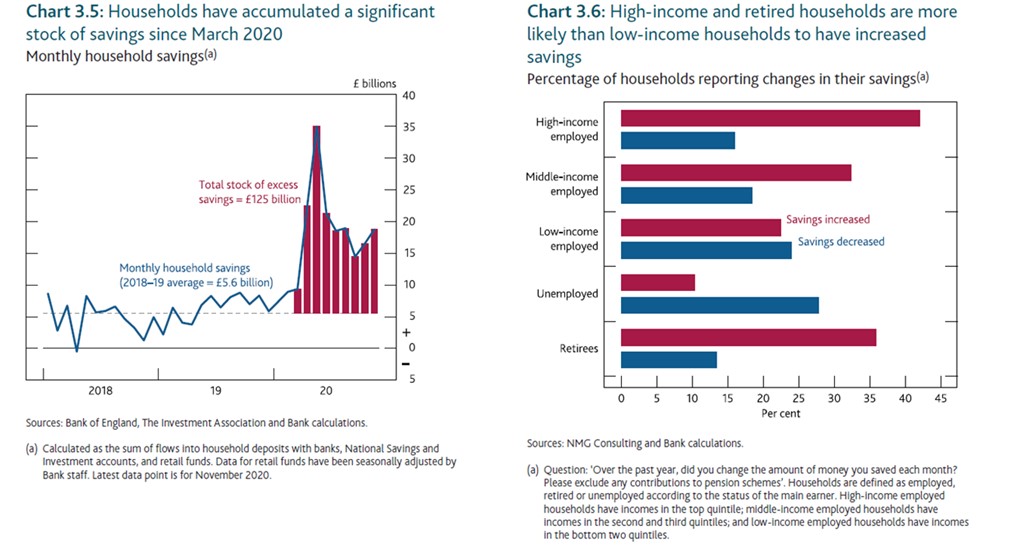 As we expect the world to begin to open up again from the second half of 2021, it does so backed by stimulus, pent-up demand and ever rising debt levels.

Inflation has been low for many years and with economic growth staying low but predictable there has been little reason to expect rapidly increasing price levels. The structure of the current crisis and the nature of the recovery may be about to change that.

We have had a year of massive disruption so any comparison from here on out that compares to that year (March 2020 to March 2021) is likely to show a big uptick in growth. For the first time since the GFC investors are expecting to see economic growth rates big enough to call into question the lower for longer framework of low growth, low inflation and low interest rates.

Will the plan for high inflation finally be working?

This has started to be reflected in government bond yields in the US since the election in November, 2020 and inflationary expectations are on the rise.

With so much spare capacity in the world in the form of unemployment and furlough there is a lot of room to grow into before we can truly declare that inflation is back to stay though.

Authorities have to play fast and loose with policy. We cannot afford to raise interest rates or withdraw support too early and if above normal economic growth eventually causes inflation to rise then that is exactly what they have been trying to achieve for over a decade.

So, whilst investors may fret from time to time about what this all means for the long-term, central banks and monetary authorities should, in theory, rejoice and hold their nerve because the plan is finally working.

We sense that the expected sprint of economic recovery will not, therefore, convince the authorities that the longer-term marathon that began in 2008 is over. If they blink and raise rates any time soon then they risk ending the race before the finish line and with nothing left in their legs to start running again.

Source: House of Commons report on the budget deficit