Markets have priced in the world reopening and stimulus measures remaining a backstop to any potential Market fallout.

This optimism is not entirely unfounded, as we have seen an increase in economic activity, progress on vaccination rollouts and recent company earnings figures that are well ahead of estimates. This, however, leaves Markets vulnerable to news on the spread of virus variants and any other adverse event that calls into question this upbeat outlook, which, if realised, will cause further spikes in Market volatility.

We believe that policy decisions pose the greatest risk to Markets now. Central banks have stated unequivocally that they will wait for sustained inflation as opposed to temporary increases before making any decisions on interest rates.

The difficulty will be to distinguish between inflation caused by supply chain disruption and inflation caused by increased demand. The former is detrimental to a country's economic growth, but it is also more likely to be temporary, while excess demand (the idea that too much money is chasing too few goods) is more protracted and coincides with lower unemployment and a country's growth rate rising above its long-term trend.

Despite the initial challenges that the US faced in rolling out its vaccination programme, we saw 25% of the US population vaccinated in the last two months, bringing the total number of Americans who have received at least one COVID-19 vaccination to approximately 46%.

To put this in context, only 26% and 32% of the population in France and Germany have received one vaccine, respectively. This divergence in vaccination progress has resulted in contrasting fortunes, with the S&P 500 returning 11.8% year to date and US GDP growth estimates revised to 8.6% annualised in Q2 (Quarter 2).

This increase in activity has resulted in company earnings exceeding expectations, with previously underperforming economic sectors beginning to outperform.

With these stellar increases in earnings, investors are wondering if inflation will rise. The Federal Reserve predicts that any increase in inflation will be temporary and that meeting their average 2% target will remain difficult; however, the Market appears to believe otherwise, as breakeven rates (the difference between the yield on nominal Bonds and yields on inflation-linked Bonds of the same maturity) have risen, with the 5-year rate now at 2.68% (the rate was 1.98% at the start of the year).

If inflation rises, we can expect more volatility in Bond Markets as the prospect of a rate hike rises, which, all else being equal, lowers the price of a Bond. However, in a world of low returns, any increase in yields would make Bonds more appealing to investors, so rather than an outright increase in yields, you may see a ‘staircasing effect’ as investors take advantage of any price drops.

The vaccination rollout in the UK continues, with over 35 million adults or more that 53% having received at least one vaccination. There is also a decrease in vaccine aversion, with YouGov reporting that only 11% of respondents are hesitant about getting a vaccine, compared to 39% in November.

According to the most recent GDP figures, the UK economy contracted 1.5% in Q1 because of renewed lockdown restrictions; however, this is significantly lower than the 19.5% contraction seen during the first lockdown.

Andrew Bailey, Governor of the Bank of England, said that while inflation is likely to be "a little bumpy," there is no expectation of a sustained increase in inflation. Inflation is expected to rise above 2% in the short term as energy prices begin to rise from last year's lows and lockdown restrictions are lifted but will fall to around 2% in the medium term.

The Eurozone economy contracted by 0.6% in Q1, according to GDP data, but forecasts are becoming more optimistic, with the manufacturing PMI (Purchasing Managers Index) survey reaching a new high of 63.4.

Inflation in the Eurozone rose to 1.6% in April (from 1.3% in March) as the European Central Bank increased the pace of its asset purchases in response to the pandemic, while the intermittent reopening of the economy has acted as a tailwind to inflation.

Germany's constitutional court dismissed an appeal against the EU recovery fund, which is set to be distributed from July, assuming there are no further complications. This stimulus is expected to add 3.5% to the Eurozone's GDP and help the Bloc return to pre-pandemic growth levels.

Japan has lagged its developed Market peers in Equity Markets, with the TOPIX up 6.2% year to date, as the country deals with the fallout from the pandemic, which has compounded the country's pre-pandemic anaemic growth and productivity.

Following three periods of negative GDP growth in 2020, the country had shown signs of recovery, with consecutive positive GDP readings of 5.3% in Q4 and 2.8% in Q1 (see Figure 1.). This was due in part to new Prime Minister Yoshihide Suga's increased stimulus measures, but also to the recovery in China and South Korea, which helped boost the country's export Market.

As the world reopens, we can expect this to be a tailwind Japan, the world's fourth largest export Market, but it will not solve the country's chronically low inflation problem. There have been pockets of inflation because of supply chain constraints and the weakening of the Yen, which, while boosting exports, has weighed on domestic spending with companies passing on higher prices to consumers; however, these are expected to be temporary.

The Bank of Japan announced last month that they are unlikely to meet their inflation target of 2% through 2023, and that interest rates will remain unchanged at -0.10%.

China has taken steps to reduce leverage within the economy, which will reduce GDP growth to around 6% from the consensus estimate of 8.4% and reduce the country's fiscal deficit from 3.6 to 3.2%.

Importantly, the National People's Congress is confident that a 6% growth rate can be achieved without additional stimulus, putting the country in an enviable position when compared to its peers who are still engaging in massive monetary and fiscal spending.

This will, however, be a balancing act, and there is a risk that too much liquidity will be removed from the economy too soon. This could be worsened by any peripheral risks we see in the Chinese economy, such as the US' decision to strengthen its critical supply chain. Any tighter import controls imposed by the US would harm Chinese exports, given that the US accounted for roughly 17% of all Chinese exports in 2020 (see Figure 2.). 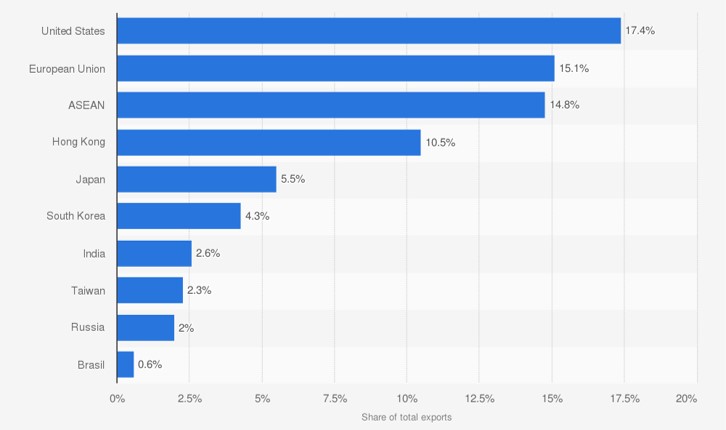 It has been a great start to the year for Equity Markets driven by several tailwinds. For Bonds, the performance has been much more normal for the early stages of a cyclical recovery. That said, this not a normal recovery and the threat of new variants of COVID could dent demand as international travel returns. It remains to be seen whether Equity Markets can maintain the current rate of increase but to do so company earnings growth must push ahead of expectations. We are cautious on such an expectation.

If you have any questions on your portfolio then please contact your TPO Financial Adviser.