Inflation - Light at the end of the tunnel?

Prospects for the global economy are dimming due to the prospect of higher interest rates in the United States, China's continued implementation of lockdown measures to reduce COVID-19 infections, and the conflict in Ukraine, which continues to impact Europe while also having global ramifications as supply chains remain disrupted.

As investors try to assess the impact of these factors on asset prices, the financial markets have remained uncertain. In this update, we will consider the International Monetary Fund’s (IMF’s) most recent global outlook, the prospects of future inflation, the upcoming US earnings season, and where markets are currently.

The IMF recently revised down global growth this year, with growth expected to be 3.6 percent, compared to the 4.4 percent growth rate predicted in January (see Figure 1.). Part of this downgrade stems from the aforementioned headwinds facing the global economy and is in contrast to above-average growth last year when the global economy grew by 6.1 percent as lockdown measures were lifted and governments and central banks supported economies by enacting mass stimulatory policies.

Whether the stimulus policies were necessary to that extent is debateable. However there appears to be agreement that the increased liquidity brought about by these policies, combined with supply chain disruptions caused by the lockdown measures (exacerbated by the Russian-Ukraine conflict) has resulted in inflation levels not seen in recent memory.

Market volatility cannot be attributed to a single factor, but the current levels of inflation seen around the world are undoubtedly a significant factor.

Inflation forecasts have more than doubled in the last six months as the market considers "how transitory is transitory?" What distinguishes this period is that, while we can identify the causes of high inflation (post-pandemic distribution, Russian-Ukraine conflict, etc.), the impact on countries varies, and several themes are emerging.

For example, given Europe's reliance on Russian energy, European nations such as Lithuania and Estonia are reporting inflation rates above 14%, while in Emerging Markets such as Sri Lanka, high inflation is having a more significant impact on food prices, leading to political crisis. By contrast, in China, inflation is relatively benign as the country's aggressive lockdown measures created a headwind to demand and there has been a less aggressive policy response than their Western peers. 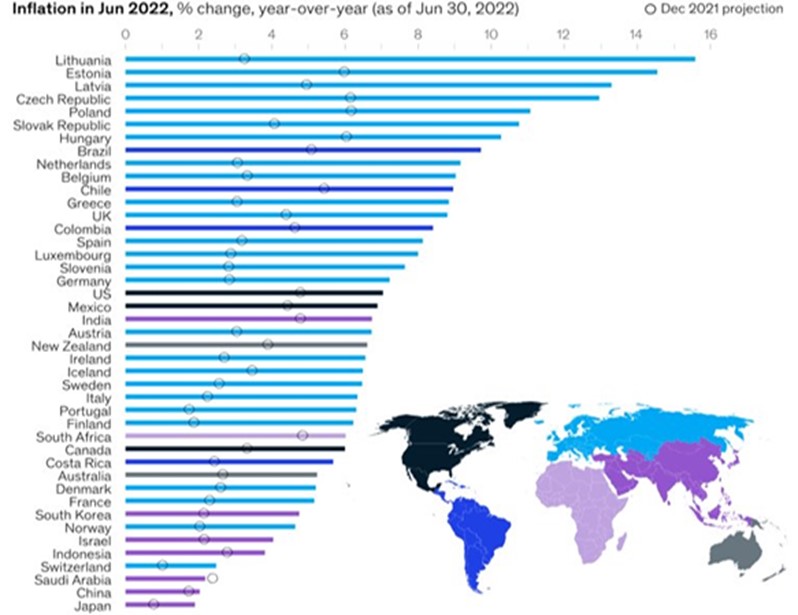 Higher inflation has a variety of effects, the most noticeable of which is an increase in the value of wages. Higher inflation means that, all else being equal, the amount you can buy is less than what you could have bought six months ago; this is one reason why we have seen an increased likelihood of a recession occurring (in developed markets), as individuals begin to reduce their spending.

However, there may be signs that inflation is nearing its peak. According to the Federal Reserve, inflation will fall to 5.2 percent by the end of the year and then to 2.6 percent in 2023. This corresponds with the US 10yr Breakeven Rate (the difference in yield between a nominal bond and a real inflation linked bond), which can be used as a market proxy for inflation expectations, beginning to fall (see Figure 3.)

Central banks have raised interest rates in an attempt to reduce demand-driven inflation. Higher interest rates mean higher borrowing and mortgage costs, which reduces the amount one has to spend, and results in a fall in consumer demand. High interest rates also discourage businesses from financing expansionary projects.

Year to date we have seen over 50 countries raise interest rates which is a record high. Clearly inflation is a global problem.

The US earnings season is currently underway, and we are generally seeing a relative slowdown in earnings, with earnings expected to grow by 4.3 percent this quarter - the lowest growth rate since Q4 2020.

However, we see a mismatch between market prices and expected earnings rates. The S&P 500 has dropped more than 20% year to date, and with earnings remaining relatively robust in Q2 on an absolute basis and are expected to rise in Q3 and Q4, it calls into question the notion that the market is valued by extrapolating a company's earnings potential. 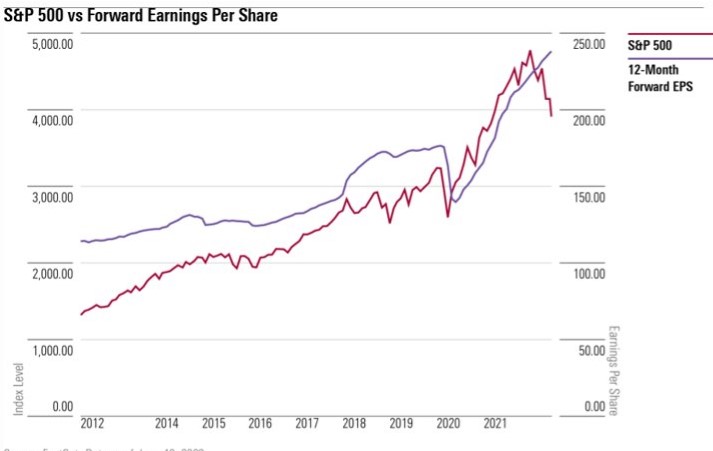 We believe this characterises the level of uncertainty in markets, especially given that the Bloomberg Global Aggregate index, a composite of government and corporate bonds, is down roughly 15% year to date. Bonds have not been a diversifier in portfolios, which is one reason why we continue to prefer short duration bonds, which are less sensitive to changes in interest rates and have seen a much lower fall than their longer-dated peers.

Moving forward we continue to see increased volatility in markers as investors reconcile inflation figures, weakening growth prospects and cheaper market valuations. As commented in a previous update it is easy to make an investment decision based on the here and now, however historically this has not proved to be a successful investment strategy and instead we would counsel that holding a diversified portfolio which is in line with your risk profile and investment objective is the best course of action.