Market uncertainty persists as investors digest a backdrop of rising inflation, slowing global growth, the ongoing conflict in Ukraine, and Central Banks embarking on a journey to reduce the stimulus provided to financial markets since the Global Financial Crisis.

This combination of headwinds has prompted financial analysts to speculate on whether Central Banks can engineer a soft landing or whether aggressive interest rate hikes will cause economies to enter stagflation.

This has resulted in widespread market volatility, with major equity indices falling by double digits year to date, ongoing volatility in commodity prices, and the diversification benefits of holding bonds beginning to wane.

In this update we explore whether the spectre of stagflation is with us and consider the outlook for the world economy.

Stagflation is a term used to describe an economy that is experiencing slowing economic growth and rising inflation.

This presents a challenge for policymakers because, under normal circumstances (if such a thing exists), Central Banks will seek to reduce inflation by raising interest rates, which reduces demand by incentivizing individuals to save and increasing the cost of borrowing money. However, a stagflation-ary economy will have falling growth, so raising rates to combat higher inflation may inadvertently stifle already fragile growth. This is where the terms "hard landing" and "soft landing" come from: will Central Banks be able to keep inflation under control while not impeding growth and achieve a “soft landing”?

This has prompted several comparisons to the 1970s, when the US economy experienced a period of stagflation.

One of the main causes  of the 1970’s stagflation were oil supply shocks, which occurred in 1973 with the imposition of an oil embargo on the US by the Organisation of Arab Petroleum Exporting Countries, and then in 1979 when the fallout from the Iranian Revolution saw worldwide oil production fall by 7%.

Given that Russia is one of the world's largest producers and exporters of oil, comparisons with the present day and the impact of the Ukraine conflict on oil (and commodity prices in general) are understandable. That being said, the oil supply shocks of the 1970s had a material impact on the price of oil, with prices rising from $23 in 1973 to $121 by the end of 1979. However, while we can only speculate as to when the conflict in Ukraine will end, to date the rise in the price of oil has been less significant, with oil rising from $53 at the start of 2021 to $104. 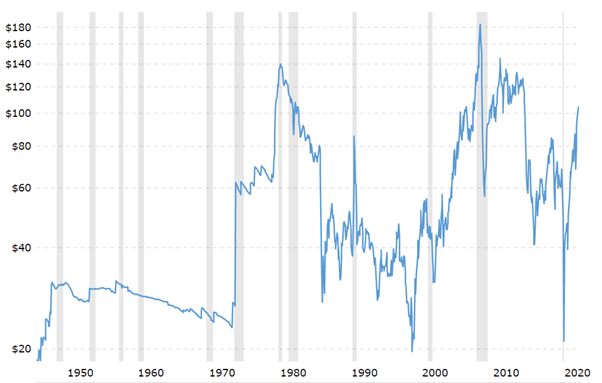 Inflation will continue to be the primary focus of investors, governments, and central bank policymakers for the foreseeable future. Inflation forecasts have risen, with the average inflation rate across major economies rising this year compared to pre-conflict forecasts. Unsurprisingly, given the region's reliance on Russian energy exports, the outlook for inflation in Europe has risen significantly, while food prices which have increased by 28% since the same time last year has seen short term inflation forecasts in Emerging Markets to increase (see Figure 2.).

In 2023, however, inflation expectations have only marginally changed from pre-conflict forecasts. Markets are anticipating that inflation will fall and that it will not remain persistently high. Part of the reason for this is that supply chain disruptions caused by the pandemic will (and are currently) satisfying some of the pent-up demand in major economies and  Central Banks have been forthright in stating their desire to tame inflation.

This backdrop leads us to believe that the likelihood of the global economy entering a period of stagflation is currently low.  However, market headwinds necessitate a pragmatic approach to managing a portfolio with diversified exposure to multiple asset classes, regions, and sectors, as well as a bias toward companies with defensive characteristics such as low debt, low variability in sales (there’s a continued need for their products and/or services) and high cash flows.

A general rule of investing is that success is determined by the amount of time invested in markets rather than by attempting to time the market. Reviewing historical market drawdown periods (falls in market value) help to illustrate this point. 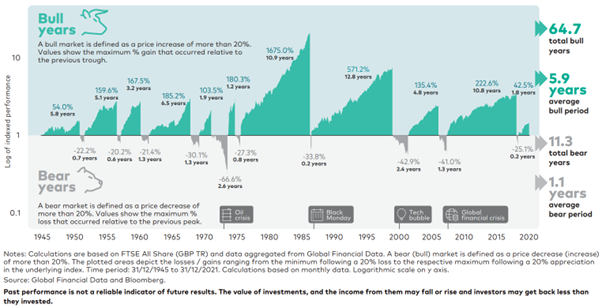 Duration is only one factor to consider; we must also consider market performance during the respective periods. When markets enter correction territory and fall in value, it can be a painful experience, with previous drawdowns ranging from -20.2 percent to -66.6 percent in the early 1970's; however, the bull market that followed each period has (since 1945) been greater than the market fall, and investors have been rewarded for staying invested.