Spring out of lockdown

Throughout the first quarter of the year the reflation theme dominated investor sentiment, as markets looked forward to a bounce in activity fuelled by stimulus, economies opening up following lockdown, and underpinned by progress in the vaccination programme.

The performance of markets clearly demonstrates this theme with most equity markets making a strong start to the year led by smaller companies which would be key beneficiaries of a cyclical upswing. For the first time in a while Bonds displayed a more traditional relationship to a rising equity market and struggled in the face of increased expectations of inflation.

In this update we take a look at some of the major regions of the world and then focus on the US earnings season that begins this week. Ultimately, what companies earn has to have a sustained period of recovery from lockdown conditions in order to justify the optimism that we are seeing in markets.

President Biden achieved his first legislative victory with the approval of a $1.9tn pandemic relief package. This was a public-friendly policy as it saw individuals receive $1,400 dollar cheques and an extension to the federal emergency unemployment benefits.

Building on this momentum the administration has proposed a further $3tn stimulus package which would look to target the countries ageing infrastructure. This is expected to be challenged however as moderates in the Democratic base have raised concerns about some aspects of the plan.

Unemployment fell to 6% in March as non-farm payroll data showed that 916,000 jobs were added in March (the highest recorded since August) and above the consensus estimate of 650,000. This is credited to the US’s progress on vaccinations which has reduced some of the restrictions on the labour market and has raised the prospects that lockdown will be lifted.

The UK moved into its second phase of reopening on Monday with nonessential shops, gyms and pubs reopening which, barring any flare-up in infections rates, could see international travel allowed from 17th May.

This has been credited to the success of the vaccination rollout and has seen the International Monetary Fund (IMF) upgrade the UK’s growth forecasts to 5.3% in 2021 and 5.1% next year, which if achieved would make the UK the fastest growing advanced economy in 2022.

UK construction activity expanded at its fastest pace since 2014 with the construction Purchasing Managers’ Index (PMI) rising to 61.7 from 53.4 in February – any value above 50 is expansionary. Importantly whilst residential builds continue to be supported by the stamp duty holiday we also saw a number of commercial projects restarting.

The Initial Public Offering (IPO) of Deliveroo ended in spectacular fashion with the stock becoming one of the worst IPO’s in London’s history, with the stock closing down 26% on its opening day. The combination of ongoing legal problems regarding the classification of the company’s workforce and that back in 2019 the valuation of the company was just £2.9bn vs the £7.9bn original IPO valuation left investors unimpressed and shows that there is such a thing as a “too expensive” stock.

The EU recovery fund continues to be dogged by political infighting - all member states must pass similar legislation to allow the European Commission to establish the fund but there is consternation with member states concerned around where the money will be going, how will it be repaid and the precedent it will set moving forward.

This delay in stimulus and in vaccination rollouts compared to the US for example has seen European growth forecasts fall from 4.3% to 4.1% this year.

Eurozone inflation increased to 1.3% in March from the previous month’s reading of 0.9% - this remains below the ECB’s target of 2% but was the largest increase since the pandemic began last March. Whilst in aggregate there has been an increase in inflation there are several member states (most notably Greece) who remain in negative territory, which highlights that the pandemic’s impact is not a one size fits all.

There is now further clarity on Europe’s Green Deal with Frans Timmermans (executive Vice President of the European Commissions) stating in unequivocal terms that “fossil fuels have no viable future”. This was notable because, for one, it was at Eurogas’s annual meeting (an association which covers the wholesale and retail European gas sector) and there was some ambiguity as to how fossil fuels (in particular fossil gas) would be used as an intermediary while Europe moved to net zero emissions by 2050.

The IMF increased China's GDP growth forecast to 8.4% this year as the country begins to pick up momentum again.

As with the UK this is a comment on the country's success on vaccination rollouts, as they have set the ambitious target of vaccinating 40% of their population by the end of June. This is already having an impact as cross border travel has been lifted and during the recent Qingming festival, domestic tourism was reported to be close to pre-pandemic levels.

The State Administration for Market Regulation fined Alibaba $2.8bn dollars after it was found to be breaching monopoly laws. The fine was equivalent to 4% of Alibaba’s sales in 2019 so not wholly material but is powerfully symbolic as one of the countries key aims was to reduce the control that large technology companies have on the sector and on the wider society.

We must also consider that since 2018 there has only been one incidence where the expected earnings growth rate was above the actual earnings growth rate (see Figure 1.). This means there is a strong likelihood that we could see a greater figure than 24.5% and if we assume that the upward revision will be in line with the last five years of earnings improvement, then we could see a figure as high as 28%. 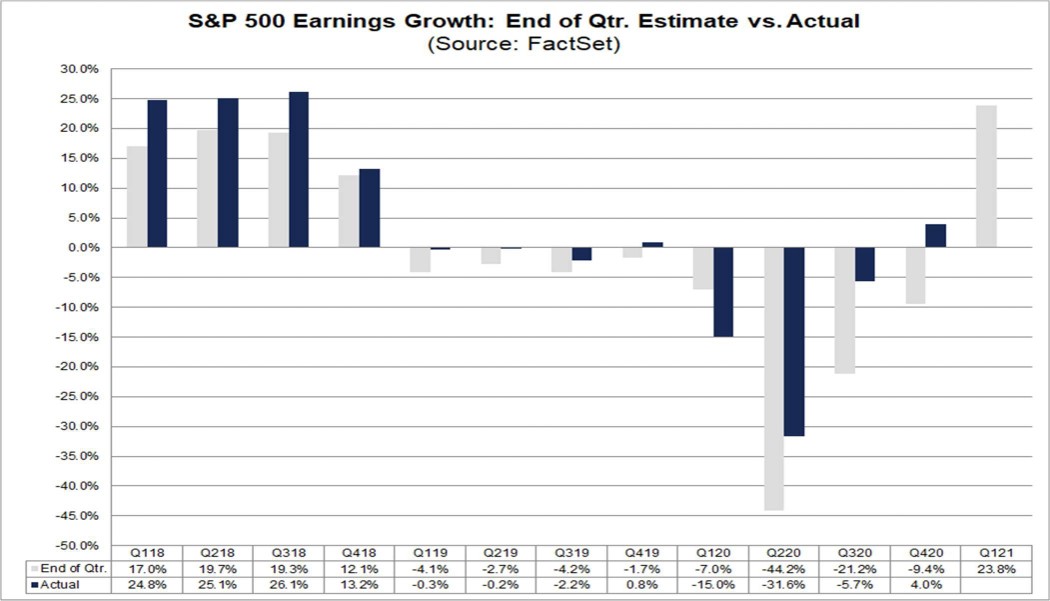 This is important when you consider how expensive the S&P 500 is on a price-earnings basis. The forward PE ratio (which looks to compare the price of a stock with its next twelve months of earnings) is higher than its five and ten year average, so investors are paying more on a relative basis (see Figure 2.). 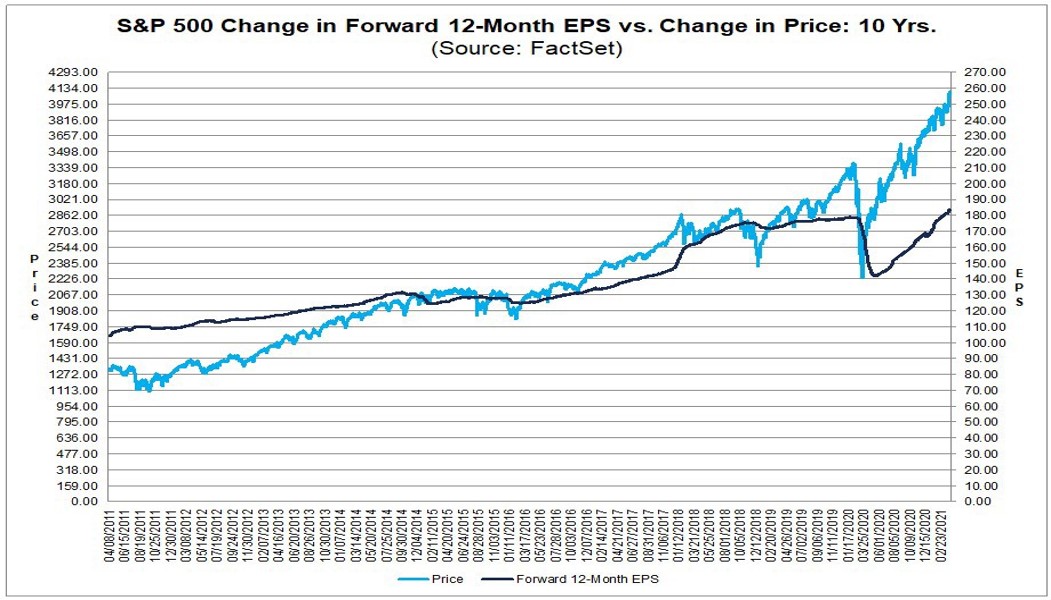 To reduce this, we need to see both Q1 figures to come in as expected (if not higher) and arguably more importantly that there is strong forward guidance that earnings will pick up throughout 2021. This leaves the market in a susceptible position as any negative surprise could derail the performance we’ve seen in the S&P 500 (just over 10% YTD).

Cautious optimism combined with volatility is likely to be the near future for markets, and as always we will be monitoring conditions in markets, interpreting new information and establishing what it means for your portfolios. Diversified and risk adjusted portfolios are paramount to ironing out this volatility. Should you have any questions about your investment portfolio then please contact one of our financial advisers who will be happy to help you.