It ain’t over until it’s over…

As global economic activity continues to expand following the depths of the pandemic, it is inevitable that we are getting closer to the point where monetary authorities are confident enough to begin to reduce their asset purchase programmes and to start to increase interest rates.

In recent months the main western central banks have been preparing investors for this event but the pathway to higher interest rates is clouded by several factors. Not least of these is the fact that the pandemic is far from over and its impact on economic growth is still evolving. In this month’s market update we look at the changing attitudes of the central banks of the UK, Europe, and the US. 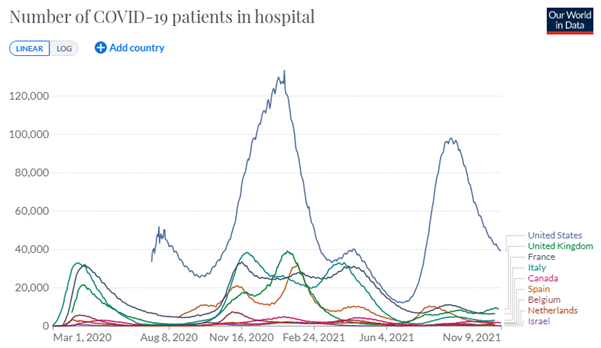 With the announcement that Pfizer's antiviral pill may reduce the risk of severe COVID-19 by 89%, this trend is expected to continue. While there is no set release date, Pfizer has submitted various regulatory filings, and Ben Osborn, UK Country Manager at Pfizer, stated in an interview that he expects the drug to be available in "early 2022."

As economies begin to reopen it’s unsurprising to see that global growth prospects are looking good. Moody’s report that G20 countries will collectively grow 5.8% in 2021 following the contraction of 3.2% that was recorded last year.

This growth rate is slightly lower than what was predicted in August, reflecting the market uncertainty that still exists. Granted there are certain idiosyncrasies at play, be it Brexit for the UK or the approval of the infrastructure bill in the US, but broadly there are two competing forces that are determining a countries growth outlook:

On the one hand, increased consumer spending, a pickup in business activity, which means increased capital expenditure and inventory purchases, are all supporting growth. On the other hand, supply chain disruptions (exacerbated by increased demand) persist, higher inflation is reducing consumer purchasing power, and the risk of a further flare-up in COVID is restricting labour mobility and could be a headwind to growth.

Markets have welcomed improved global growth prospects, but this raises a difficult question for central banks. When, specifically, will they remove the accommodative policy measures put in place at the start of the pandemic to help support economies during the pandemic?

There was a somewhat surprising pivot from the Bank of England when they announced that policy rates would remain unchanged at 0.10%. In the run-up to the MPC meeting, the market was pricing in a 64% chance of a 0.15% hike, based on Governor Andrew Bailey's rhetoric, in which he cited UK inflation as the primary catalyst for a rate hike.

This catalyst has not changed, instead the viewpoint from the Bank of England now is that inflation is expected to reach 5%, but importantly it will abate and begin to fall in Q3 2022 and return to the 2% target (see Figure 2.)

Another factor considered was the current state of the labour market and the impact that the elimination of the furlough scheme might have on unemployment and labour shortages. Labour shortages in the UK are partly to blame for the higher wage growth we've seen, but the top-heavy UK labour market continues to see certain sectors like professional services command a higher wage than sectors such as accommodation and hospitality.

In the US we are seeing momentum pick up in the labour market with the unemployment rate approaching its pre-pandemic level as it fell to 4.6%. This comes as the headwinds we were seeing in labour markets begin to subside, such as the removal of lockdown measures and removal of unemployment schemes, which has encouraged individuals back into the workforce.

This has been a tailwind to company earnings with the latest quarterly earnings figures showing that 81% of companies have reported earnings above estimates – this is higher than the historic five-year average of 76% (See Figure 3.). 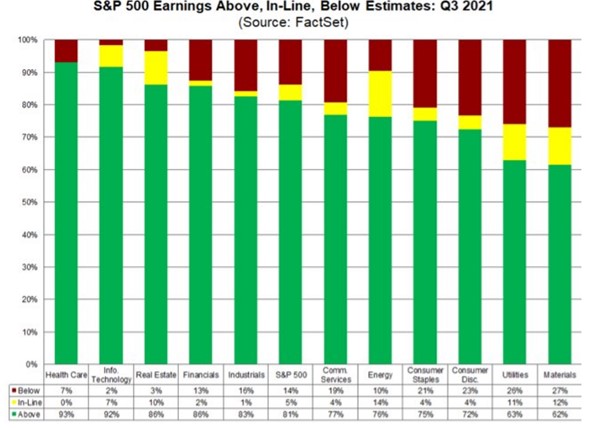 Lower unemployment, higher earnings and the approval of the bipartisan infrastructure bill saw the S&P 500 push higher and is now up c. 26% year-to date. This meant the S&P 500 had produced seven consecutive positive trading sessions and with December approaching and the aptly named “Santa rally” in play it’s possible there’s further room to run although one must consider the likelihood of a retracement in gains in the new year.

These factors have contributed to inflation rising to 5.4% in September, but Federal Chair Powell believes that this increase is largely due to transitory factors and will subside as we move into Q2 and Q3 of next year.

The Federal Reserve also decided to keep rates on hold while reducing its $120 billion monthly asset purchase; specifically, it will reduce its purchase of Treasuries by $10 billion per month and its purchase of agency mortgage-backed securities by $5 billion per month. Powell, however, continues to reaffirm the message that if economic conditions worsen, the Federal Reserve will resume its full-scale asset purchase programme.

In Europe, growth is picking up, with the Eurozone growing faster than the United States and China for the second quarter in a row. However, the Eurozone continues to lag, so this can be interpreted as a delayed (but welcome) recovery.

This meant that the recent ECB meeting was a focal point for markets, with the takeaway message being that interest rates would not be raised and that rates would be "very unlikely" to rise next year. This also coincided with the announcement that the Pandemic Emergency Purchase Programme (PEPP), the EU's asset purchase programme to aid the economy during the pandemic, is set to expire in March.

This is not a complete step back, as the ECB will continue with its other mass asset purchase programmes, and another programme will most likely take the place of the PEPP to assist countries in transition. One reason why this is important is because we’ve seen a pickup in yields for periphery countries (Italy, Spain, Greece, and Portugal). You can perhaps see this as the market not believing the ECB’s outlook on inflation, but with increased financing costs it’s likely the ECB will continue its purchase programme to push yield down.

Equity markets have reflected the pick-up in the global economy this year and supported by a significant recovery in corporate earnings many indices have pushed through to make multiple new highs. Although the vaccination coverage is uneven globally, the developed markets dominate investment sentiment. Those economies have better access to vaccines and the prospect of new treatments takes pressure off hospitalisation rates, so one potential negative for investor sentiment appears to have been removed in the short-term. Coupled with that, the central banks in those markets appear to be taking a more measured approach to the removal of extremely loose monetary policy than they had been hinting at until the last week or so. This removes another potential block on positive sentiment in markets. Undoubtedly, next year will see investors fret at some point about a combination of higher inflation, the strength of economic growth, government policy and corporate earnings/valuations. For now, it seems only a leftfield event can derail the mix of positives that have built up as we enter the final phase of the year.

It has been an exceptional year for equities so far but as the recovery progresses the comparisons will get harder so investors must remain vigilant and not get complacent.