Uncertainty in financial markets is likely to continue into the second quarter due to concerns around the outlook for global economic growth, rising inflation and the impact of the Russia/Ukraine war. Global growth has been hampered by the continuing commodity-price shock and significant geopolitical risks. Equities and bonds both struggled amid the Russia/Ukraine crisis whilst concerns of rising inflation prompted expectations of further interest rate rises. Growth did, however, start to tick back up in the US and UK as omicron cases dropped.

The US is more cushioned from the impact of War in Europe as it not reliant on imported energy and consumers there have pent up savings and stimulus to help support economic activity. This will embolden the Federal Reserve to raise interest rates quickly this year but at some point higher rates could also dampen activity.

Markets are now pricing in 8 additional 25bps (0.25%) interest rate hikes from the Fed this year despite fears around stagflation, which is high inflation combined with little to no economic growth. We are cognisant that this is a scenario but ascribe a low probability given that US GDP growth is still robust, unemployment continues to fall and that we are likely to see expansionary fiscal policies in the form of increased infrastructure spending by the US Government.

Part of the yield curve – the difference in yields available to investors depending on the term-to-maturity of Government debt - inverted this month as the two-year yield rose above the ten-year yield. Historically an inversion of the yield curve has preceded a recession because the short-term interest rates are too high and investors expect that to cause growth to falter and so demand less compensation for the risk of inflation in the future. However, we must recognise that the current market backdrop in is different as quantitative easing suppresses yields and that inflation pressures are currently high in the short-term but are expected to fall as the world gets back to normal after the Pandemic.

Previous recessionary periods have also been preceded by periods of consistent inversion across the curve rather than short-term inversion between a subset of the curve i.e., the two-ten spread. Our base case remains that the US will not go into recession in 2022, in part because of the tight labour market, higher wages, reported high savings accrued since the pandemic and proposed increase in fiscal spending in the form of an infrastructure package.

UK equities gained in March as investors continued to favour the type of value based companies that are listed here with sectors like energy and mining benefiting from the spike in prices. The Bank of England (BoE) raised its base rate by 0.25% to 0.75% in March as inflation forecasts reached 7% for April. The UK is not as dependent on Russian energy imports as other EU countries; however, it is a heavy oil and gas user, so prices are expected to rise even further. The UK also announced this month that it would stop importing Russian gas by the end of 2021 and investors are concerned that this move will further exacerbate inflation. The government are beginning to announce measures to mitigate the rising cost of living including a 5p cut in fuel duty and a £3,000 rise in the National Insurance threshold.

European stocks gained slightly over the month; but Europe is a large importer of oil and natural gas from Russia which means that it is vulnerable to the sanctions imposed and inflation is likely to get higher. Eurozone headline inflation hit an all-time high of 7.5% year-on-year in March (See Figure 2). 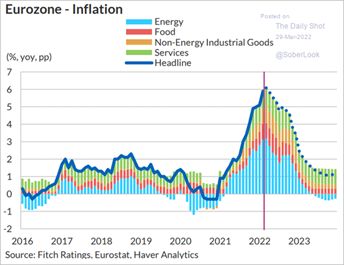 This is an increase from 5.9% inflation reached in February. Energy prices are the largest contributor to this rise (See Figure 3).

The EU said that they will reduce imports of gas from Russia by two-thirds before the end of the year through increased efforts towards energy efficiency, diversification, and investing more in wind and solar power plants. This will accelerate the transition toward renewable energy. Germany has rejected bans on the import of Russian oil and gas because 60% of their energy comes from Russia and instead said that they would apply ‘sustainable’ pressure.

In France, the election advanced two candidates Emmanuel Macron and Marine Le Pen who will face each other in the presidential election run-off on the 24th of April, after neither candidate was able to secure a majority. France will now see a repeat of 2017 election. Voters will be asked to choose between pro-European economic liberalism or far-right nationalism.

For months Macron looked like a shoo-in to win and he would be the first president in 20 years to win for a second term. However, as inflation rose and energy and food prices surged, Le Pen grew more popular.

If Macron wins, it will be seen as a victory for the European Union. Many say that if Macron was re-elected there would be increased cooperation and investment in European security and defence, especially with a new pro-EU German government as well.

Chinese markets declined in March because of a new outbreak of the Omicron variant which sent cities into full scale lockdowns because of the country’s COVID-Zero policy. Shanghai’s cases have now exceeded the initial COVID outbreak in Wuhan back in 2020. China’s growth expectations are being revised down because of the strict COVID measures. For example, coal supply has been unable to match the rapid demand growth due to lockdowns and a lack of mining. 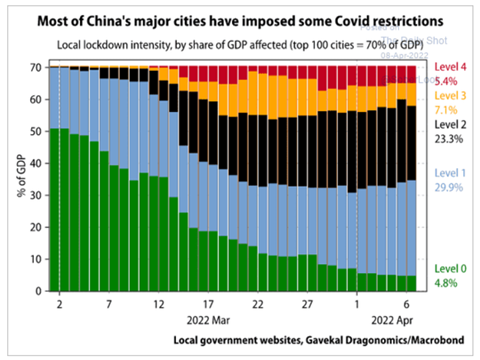 The chart above (Figure 4) demonstrates the economic impact of China’s lockdowns, on the left you have actual impact to GDP and on the right is the severity of lockdown. As expected, the more severe the lockdown the more impact on growth.

The lockdowns are also causing global supply chain problems. Activity in China’s manufacturing and services sectors simultaneously contracted for the first time in 2 years in March because of the COVID outbreak. The lockdowns caused Chinese manufacturing plants to close and led to an increase in global supply constraints in some sectors. One of the main companies to stop production was Foxconn, which is a major iPhones assembler in Shenzhen. They only closed for a week, but it caused apple stocks to fall 2.5%.

China’s CPI (inflation) figure was 1.5% in March year on year compared to the 0.9% in February. Although this seems relatively low, China’s Producer Price Index (PPI) figure, which was also released yesterday, was 8.3% year-on-year. When PPI increases it shows an increased cost for sellers and they have two options either reduce their profit margin or, more likely, keep margins in tact and raise prices for the consumer.

Irrespective of the Russia/Ukraine outcome, China will have to quickly loosen its policy stance to ensure hitting its growth target for the year. With the party congress later in the year it seems likely that the Common Prosperity measures of last year will take a back seat.

Japanese stocks gained over the month, ending up 5%, after the government announced an additional package of measures to boost the economy. This included releasing gasoline reserves because Japan’s CPI rose 0.8% in March year-on-year. Rising covid cases throughout March caused factory shutdowns and persistent semiconductor shortages.

Economic momentum as the world reopens was always bound to slow, but the War in Ukraine serves to push inflation higher and cause an uncertain growth outlook for the remainder of 2022.

We think that in the face of this, monetary authorities will have to balance the desire to control inflation with the impact that increased interest rates could have on economic activity.

We expect further volatility as the year progresses but companies and consumers are in a strong position to support market levels and will be helped by further fiscal stimulus in the West and monetary easing in China.

In an environment like this, long-term objectives should be core to portfolios because these conditions favour persistence and a set of clear investment goals. It is also worth remembering that although geopolitical tensions cause unsettling periods in the market, they do pass.