The last few weeks have seen turmoil in the UK currency and bond markets on the back of the announcement of the so-called mini-budget. Gilt yields have spiked and Sterling has taken a hit as investors appear to have lost confidence in the government.

The mini-budget laid out a series of unfunded tax cuts, primarily benefiting the wealthy. However, as the wealthy tend to spend less of their income than the poor, the positive impacts on growth are questionable. Markets have repriced Gilts accordingly, demanding a higher yield to compensate for the dent in confidence in the UK’s fiscal position and the credibility of policymakers. Additionally, the inflationary impact of the extra spending has dented the value of Sterling.

Bond yields and prices move inversely to one another, so the rise in yields has decreased the value of Gilts. This nearly precipitated a crisis in some parts of the UK pension sector, resulting in forced selling of Gilts and other assets to raise cash to meet margin calls. It was only halted temporarily by the intervention of the Bank of England (BoE), who reversed their Quantitative Tightening program and began buying some long-dated Gilts. This temporarily halted the decline in Gilt values, while also impacting global bond markets as investors concluded that Central Banks around the world would step in to maintain the value of government bonds if volatility reached levels that posed systemic risk.

The mentioned rises in Gilt yields, caused by fiscally generous policy measures, have caused mortgage rates to be repriced upwards, with the impacts of this likely cancelling out the benefits to the average household of the energy price caps.

While the chancellor has U-turned on the top rate of income tax cuts, the rest of the tax cuts remain – leaving borrowing this year estimated to hit £190bn. At 7.5% of national income this would make it the third-highest peak in borrowing since the Second World War, after the Global Financial Crisis and the COVID-19 pandemic.

Admittedly this figure is particularly high due to the £60bn earmarked for the energy price cap, but the impact over the longer term remains severe, with the Institute for Fiscal Studies estimating that by 2026 we will be borrowing over £110bn - 3.9% of GDP. These figures are particularly worrying because these sums are likely to have to be borrowed at interest rates far above the sub-2% rates the government borrowed over the last 10 years. This means that it could lead debt servicing costs to surge from the present £50bn to £95bn next year. 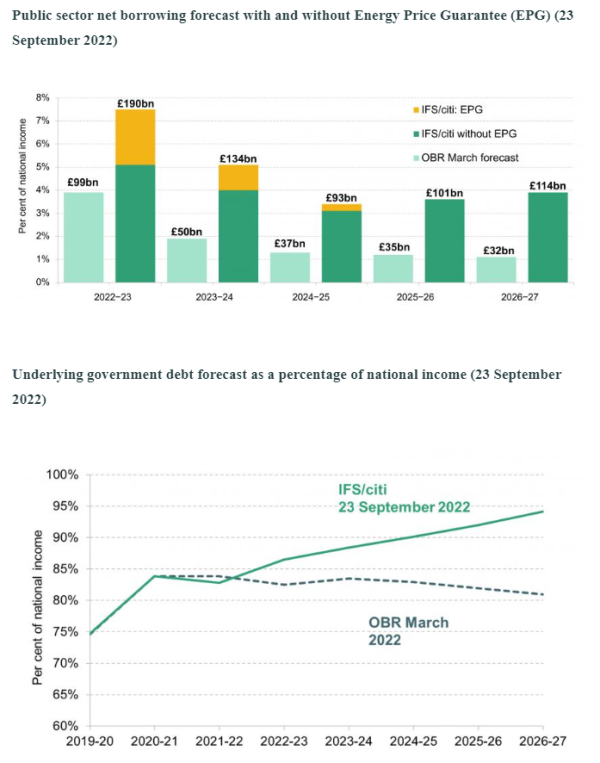 While an increased debt burden is certainly a problem, it would be far more palatable if it were to have a meaningful impact on economic growth. However, the situation we find ourselves in is far from ideal for such fiscal splurging. Unemployment rates, a good gauge of the spare capacity in an economy, are historically low and so it is therefore highly questionable as to whether this increase in net borrowing will spur an increase in the productive capacity of the economy. Rather, further increases in inflation seem the most likely outcome. This view is held widely among economists, who have downgraded the expectations of UK growth from 0.1% to a contraction of 0.3%. Additionally, the weakening of the pound which followed the mini-budget will increase inflation further due to the high proportion of imports within the UK consumption bundle. 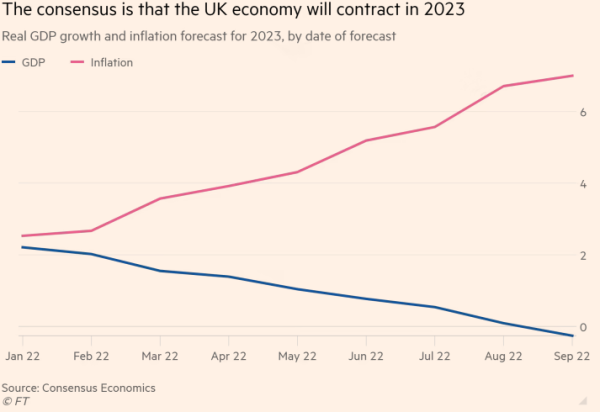 Kwasi Kwarteng has given himself 3 weeks to come up with a debt-cutting plan. This will have to come with unrealistic assumptions on the growth impact of the plan or from cuts to spending as the remaining proposed tax cuts appear to have an ideological ringfence around them. It is difficult to see what the chancellor can do to change the balance between spending and receipts in the short-term, unless he either cuts spending or launches another windfall tax on the energy companies?

If he does cut spending then the burden is likely to be disproportionately felt by those on lower incomes and it is this part of society that spends incremental income and in doing so helping growth.

Markets may well react positively in the short term to the budget becoming closer to balanced, but only if investors believe the story.

What happened to pension funds and the BoE response?

In short, pension funds hold Gilts as the interest payments provide the funds needed to match with their long-term liabilities (payments to pensioners). However, the UK government has not issued enough long-term debt for pension funds to fully match those liabilities and so they are forced to use interest rate derivatives that require them to post Gilts as collateral. The problem came when the mini-budget caused Gilt prices to fall, forcing these pension funds to sell Gilts to re-collateralize their positions with cash. This selling then pushed Gilt prices down further and exacerbated the original problem, causing a ‘doom loop’ that only an intervention by the BoE could stave off.

The BoE stepped in with the promise of a £65bn Gilt purchase program, reversing their previous Quantitative Tightening program of selling Gilts they have bought over the previous decade of Quantitative Easing. This action temporarily calmed markets, not only in the UK but globally. As the intervention reinforced in the minds of investors the idea that Central Banks will always step in to purchase government bonds when their price falls threatening risks to systemic stability.

Despite the best efforts of the BoE, long term Gilt yields have begun to move upwards as they did immediately after the mini-budget and it is yet to be seen if they will be able to, once again be able to regain the market’s confidence.  The image below shows a chart of 30-year Gilt yields and it seems unlikely that the Bank of England will be able to step back from its promise of support until the Chancellor of the Exchequer outlines a credible debt reduction plan or the government abandons some or all of the mini-budget. 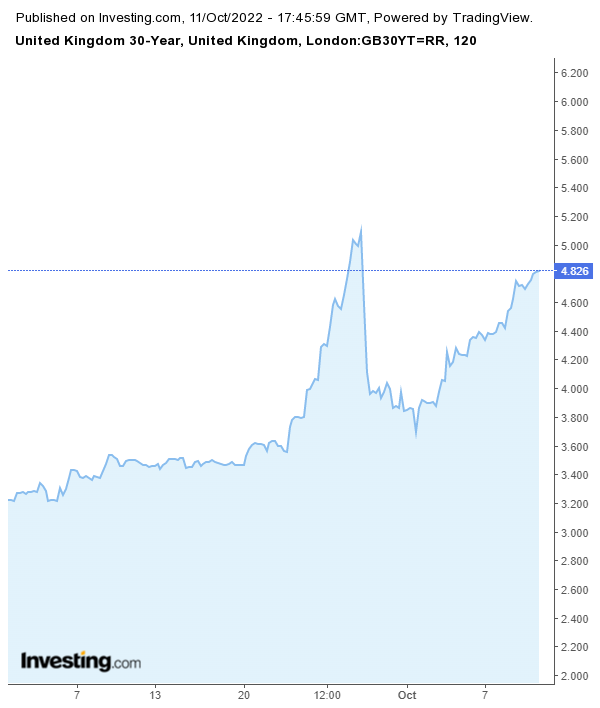 The impact on mortgages

Interest rates and government bond yields matter for mortgage rates but so does confidence in the economic environment. For a short period the volatility caused by the government proposals became so extreme that mortgage lenders pulled out of the market, only returning a few days later after some stiff words from regulators and policy makers. 10% of the UK population is on a variable rate mortgage and so immediately faces higher rates. The most popular mortgage in the UK is the 2-year fixed rate mortgage, meaning in the next 2 years there will be many homeowners moving onto variable rates tied to the higher prevailing mortgage rates, while new homeowners will immediately face these rates – as high as 6% in some cases. This is the highest that 2-year fixes have been since 2008 and compared to a year ago interest costs for 2 or 5-year fixed mortgages have gone up by over 225%* 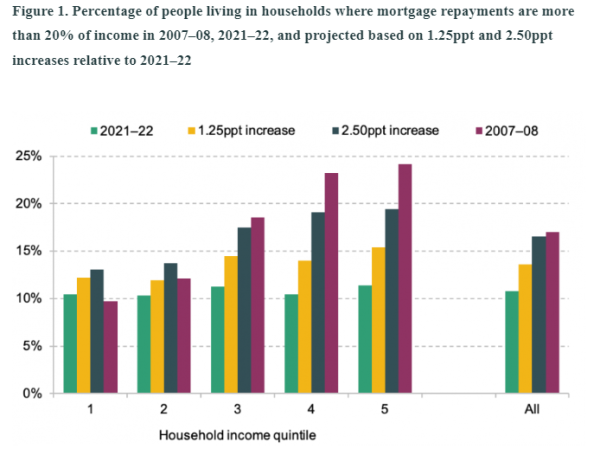 This graph shows the impact of a 1.25% and 2.5% increase in mortgage rates on the UK population by income quintile and compares these to 2008. The Y axis measures the percentage of that income quintile that will have to spend 20% or more of their income on mortgage payments. As can be seen, for the bottom 60% of earners the impact will be significant, and not far away from the pain seen in 2008.

While households will benefit from the energy price cap, increased mortgage payments are likely to affect the homeowners. Furthermore, as higher mortgage costs are passed on to renters even non-homeowners will feel the pinch.

The government plan is only half-announced and it has caused mayhem in markets and is being rightly derided by economists. It is a plan for economic growth in an economy where labour markets are already tight and inflation is high. As it stands, it risks stoking inflation and impacting confidence in the British economy and government. It has caused the market for government debt to become disorderly, prompting the Bank of England to intervene, and whilst we are in the no-mans-land of only half a plan it seems unlikely that the central bank can step back from this support. If ‘successful’ it is likely to force the Bank of England to keep interest rates higher for longer to fight the extra inflation it will undoubtedly stoke.

However, we only know half the plan and as far as we can see, this is the ‘good bit’. In a few weeks, the Chancellor will have to outline measures that should include spending cuts, that are likely to fall disproportionately on those that are struggling with energy bills and the cost-of-living crisis. That section of society is probably the most receptive to spending more to support growth, but it simply can’t afford to at present. If he doesn’t cut spending then we will have to digest an implausible forecast of rapidly rising economic growth.

Perhaps it is time for a meaningful windfall tax on energy companies?

We await the full picture from the government but see a more likely path to climbdown and defeat than success.