When will central banks come off the gas?

December capped off a strong year for equity markets, as the opening of economies, based upon successful vaccination programmes and fuelled by loose government policy, helped to propel corporate earnings above expectation. There was also a strong end to the year as volumes begin to fall over the holiday period. There was more going on beneath the headline index levels and rotation from value to growth has now started to gather pace in early 2022.

There was a marked shift in the attitude of the central banks in the UK and US towards monetary policy. Inflation has been a feature of the reopening phase of the pandemic, as resurgent demand chased limited supply, buoyed further by savings from the periods of lockdown. This environment has extended to labour markets where less freedom of movement and workers re-evaluating life has resulted in early retirement or job changes. There is now significant upward pressure on wages with November’s three month average wage growth recorded at 4.3% (see Figure 1.).

Although central banks forecast that inflationary pressures are likely to recede in coming years; they are also worried that this period of high inflation might find its way into expectations of future inflation, which in some ways can make further inflationary pressures inevitable, especially if the employment markets remain buoyant. Throughout the last quarter there was a marked hardening in the views of both central banks, signalling the prospect of monetary support through bond purchases and low interest rates. The Bank of England ‘went first’ with its decision to raise interest rates, whilst continuing bond purchases (Quantitative Easing, QE). The Federal Reserve in the US has gone further by outlining plans to slow down bond purchases (Quantitative Tapering, or QT!) and the prospect of interest rate rises in 2022 to curb inflationary pressures.

With the threat of Omicron still causing uncertainty, this caused short-term government bond yields to rise, in anticipation of future interest rate increases, whilst longer-dated government bond yields stayed flat. This so-called ‘bear flattening’ of the yield curve was a sign that bond investors are still cautious on the growth outlook. Equity investors, on the other hand, read positive signals into the data on Omicron, which, despite much higher transmissibility, was not causing a marked spike in serious illness as populations are largely now vaccinated. The year ended positively for equities and rather quiet for bonds. The impact of the Bank of England rate rise caused GBP to strengthen against other currencies, thus reducing some of the gains from owning overseas assets for Sterling investors.

Rotation from Growth to Value?

A key feature of the falling interest rate environment since the global financial crisis of 2008 has been the willingness of investors to attach higher valuations to those companies with good long-term growth prospects. With interest rates and inflation staying low for so long and with many companies able to produce reliable growth, investors placed a premium on such companies. Over the same period, so-called value stocks, which are more exposed to the economic cycle, have been out of favour.

There were signs in December that higher interest rates were causing a rotation in the type of company that investors were willing to buy in the short term. Growth stocks such as technology began to underperform wider markets, while value stocks, such as utility companies, started to perform better. 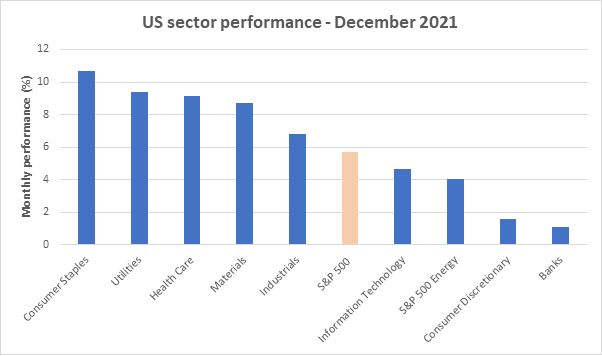 As we entered 2022 this rotation gained traction. Longer dated government bond yields jumped in reaction to further signs of the Federal Reserve’s tightening of the monetary environment. The publication of the Fed’s December meeting minutes made their fear of inflation clear. These minutes resolved not only to end bond purchases, and raise interest rates in 2022, but to reduce the size of their balance sheet by selling assets (QT). In the pre-Christmas market this might have been greeted by fears that economic growth could suffer as a result. For now, investors are downplaying the threat posed by Omicron (or future variants of COVID) and are looking forward to the pandemic becoming endemic. This predicts a world where we live with the virus and the Fed and other Central Banks are having to be more aggressive with policy.

So, what does that mean for this year?

The relative fortunes of growth, value, and technology versus cyclical look to be intertwined with interest rates and yields, economic growth, inflation, and Central Bank policy. Ultimately, the prospects for cyclical and value will be helped by rising yields and economic recovery. If that falters, so will yields and the growth stocks will once again reassert themselves.

Our view is that yields will move higher in stages. This will allow markets to adjust in an orderly fashion, but much will depend on economic growth this year.

Global growth rebounded last year. This year growth rates are forecast to fall but the high growth seen last year was well above the historic rates. The forecast for real GDP figures (which considers the high inflationary environment) are still positive.

There are several headwinds which could disrupt growth such as the finding of a new COVID variant, or inflation being more persistent, however, we see the base case as a return to normal.

In this environment we would expect a continuation of improving corporate fundamentals, especially for those sectors adversely affected by the pandemic, but also recognising that the market will continue to be sensitive to key macroeconomic data and ongoing Central Bank rhetoric.