It’s East vs. West (and don’t mess with Chinese dragons)

July saw a continuation of broad market themes but within asset classes there was a marked divergence in fortunes particularly with regard to China and Asia in general.

US Earnings Growth continues to impress

Developed market equities maintained momentum buoyed by a stellar second quarter results season where the year-on-year earnings growth looks set to come in at close to 90%* versus initial estimates of 64%. The gains have been broadly spread across all market sectors, as can be seen in this chart: 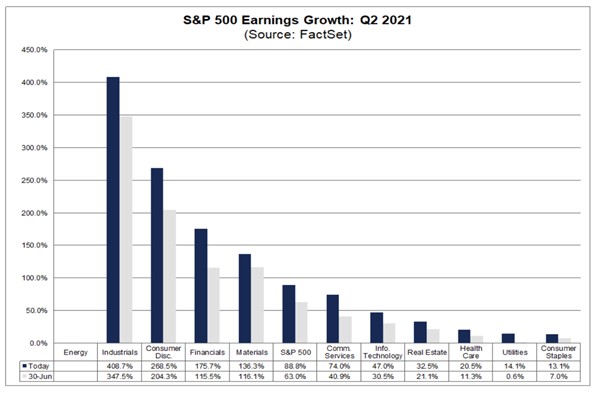 Revenue growth for the quarter is lower, but no less impressive at 24.7% year-on-year, which, if maintained for the last 11% of S&P 500 companies yet to report, would represent the best quarter since 2008.

Estimates for the second half of the year are lower, but still with double digit earnings growth. The “opening up” effect will slow, but US analysts are issuing more buy recommendations than at any other time in the last 18 years, so optimism abounds.

At an historically high price to earnings ratio of 21x next year’s earnings estimate, the market valuation sits above its 5 year and 10 year average, so the US Market needs these growth figures and there is no room for disappointment. Not all equity markets are so richly valued but the US is a key driver.

The yield on Government debt has fluctuated so far this year driven by hopes and fears (economic growth, inflation, a rapidly re-opening world and the Delta variant of COVID being the key drivers). More recently the yield has fallen (and prices have risen) in spite of rising inflation. This means that yields when adjusted for inflation are negative and falling. Worldwide vaccination rates lag the UK and hospitalisations may be down but the ability of the pandemic to disrupt normality still lurks.

Concerns arise if Central Banks remove stimulus too early or embark on interest rate increases when the market thinks the economy is not strong enough. Here we think that the authorities will hold their nerve. The Bank of England expect the hump in inflation to be temporary, a natural result of reopening. Supply chains will eventually adapt so that the components for production (raw materials, unfinished goods and labour) are available without shortage. At present input costs are rising rapidly and this is unsettling many companies. The chart below which shows the number of times the supply chain was mentioned in quarterly earnings reports by Russell 3000 Companies in the US.

Some finished goods are not available because production cannot be completed. For example, the shortage of semi-conductors and the impact on new car production. Limited supply pushes up the price of new cars and also the price of substitutes, in this case second-hand cars. If input price inflation causes less consumption, then that is not good for company earnings. In such an uncertain environment, it is not surprising that the demand for index-linked debt has risen markedly in 2021, as the chart below from the FT illustrates. In July, UK index linked securities were the best performing asset class, rising by 6.5% 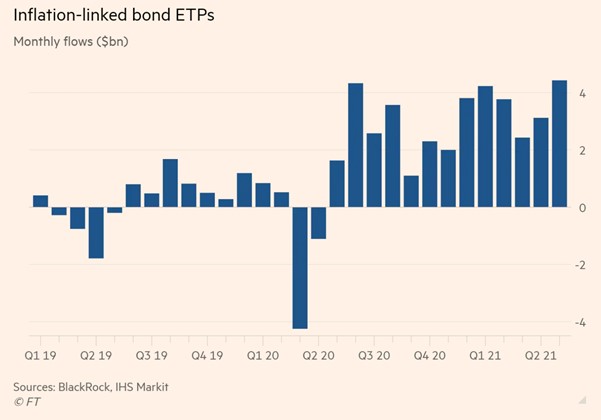 Chinese equities fell by around 13% in July and dragged down the equities of Asia and the Emerging Markets.

This is as a result of a long-standing drive by the Chinese authorities to influence market behaviour and social and cultural outcomes. Chinese technology giants once seemed untouchable, with billions of profits through aggressive expansion. That status is now more uncertain after a year of Beijing’s sweeping regulatory crackdowns that have spread like wildfire across sectors.

The Chinese anti-monopoly regulator fining Alibaba and the People’s Daily in China calling online gaming ‘spiritual opium’ are two in the latest developments in a string of measures that began in October last year when Jack Ma, the billionaire chief executive and major shareholder in Alibaba, criticised the Chinese competition authorities. Ma has not posted on social media and has rarely been seen in public since. A strong message being sent to the ever more powerful group of wealthy individuals that control China’s largest technology companies. Chinese authorities have also changed the structure of the education sector saying it is a social issue as ordinary people cannot afford ever rising fees. This collapsed the share prices of a number of companies in which foreign investors had a significant shareholding. These actions raise valid questions around Chinese state governance and western investment. The Chinese authorities are without doubt different from what we are used to in the West.

In July, the UK lifted most of its remaining COVID-19 restrictions. Equities rose in July despite a volatile first few weeks due to market selloffs amidst fears of the rapidly spreading Delta variant.

The growth outlook remains strong, but with businesses struggling to fill job vacancies and shortages of raw materials starting to bite, business costs rose at the fastest pace on record in July. However, PMIs showed clear signs that supply bottlenecks are putting a ceiling on activity levels. UK CPI rose to 2.5% in June on a year over year basis.

US equity and bond markets contrasted greatly in July as the S&P 500 hit new all-time highs while US Treasury yields slumped to lows last seen in February. Demand has been unusually strong due to a combination of Fed purchases, institutional investors looking to rebalance following a strong period of equity gains and elevated cash balances across the private sector. Earnings for Q2 emerged as the most influential factor. The proportion of US Companies beating earnings estimates for Q2 is currently running far ahead of the five-year average.

Eurozone equities notched up gains in July. Top performing sectors included information technology, real estate and materials. The energy sector was the main laggard. Flash purchasing managers’ index (PMI) data offered encouragement that the Eurozone recovery was gathering pace last month. Business activity grew at its fastest rate in 21 years, with a robust improvement in service sector activity more than offsetting a modest decline in the manufacturing PMI that was linked to supply chain disruption. Eurostat data showed Eurozone GDP grew by 2.2% in Q2, after a 0.3% decline in Q1, while annual inflation ticked up to 2.2% in July versus 1.9% in June.

The Japanese stock market ended July at the bottom of its recent range, recording a loss of 2.2% for the month. There was also concern domestically as COVID-19 infections picked up towards 10,000 per day nationwide. Opposition towards the Government’s approach has been rising and public approval for the Suga cabinet fell to just 33%. Near-term prospects for the full recovery of the domestic economy are dependent on the continued success of vaccine roll-out.

Emerging market equities continued to lag developed market peers in July. Weakness in Chinese stock markets particularly notable; reforms to the private tutoring sector triggered volatility towards the end of the month. As a result, China was the worst-performing index market in July, recording a decline of 13.4%. The Philippines and Thailand both lagged the MSCI EM Index as daily new cases of COVID-19 increased; the share of the population fully vaccinated is sub 10% in both countries.