The invasion of Ukraine by Russia has wreaked destruction on the second largest country in Europe, causing appalling suffering and loss of life. It is clear that the brave resistance by Ukrainians and the strong leadership of President Volodymyr Zelensky has surprised the Russian military and its leader. The conflict has had a dramatic impact on financial markets as investors digest the uncertainty of the situation and the potential for it to have a global economic impact. In economic terms, 2022 had already begun badly due to fears of inflation and the degree to which central banks will raise interest rates in response, the unfolding crisis in Ukraine has resulted in further equity market falls.

Russia is a major global superpower, but its economy makes up only 1.5% of global output and it’s now suspended stock market accounts for only 0.1% of the value of total global indices. However, Russia does wield global economic power by virtue of its position as a supplier of various commodities that the world needs to continue to recover from the disruption of the pandemic. It is, of course, also a political superpower due to the geopolitical legacy of the USSR and its stockpile of around half of the world’s nuclear weapons. This is the reason why the West will not impose a no-fly zone over Ukraine, as it would put NATO forces in direct conflict with a nuclear superpower and risk an escalation into World War III.

The extent of Europe’s reliance on Russian oil and gas supplies is well documented. Russia also controls a high percentage of global supply of a number of other important commodities at a time when supply is struggling to meet demand after two years of disruption due to Covid-19. The chart below shows a snapshot of some of the major commodities that Russia supplies: 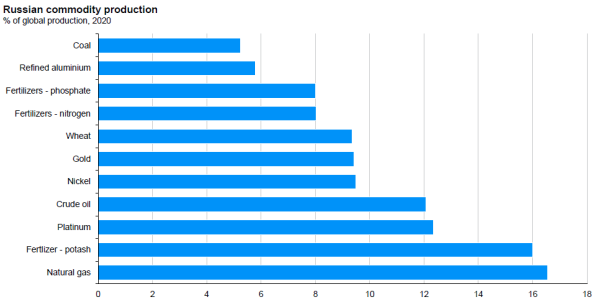 The situation is exacerbated by the fact that Ukraine is also a major producer of wheat and between the two countries they control one quarter of world supply. Ukraine alone also makes up almost half of exports of sunflower oil. Both are key commodities used in many food products. If harvesting and processing is hindered or exports are blocked, importers will struggle to replace supplies. Stepping up production in other parts of the world could help to reduce the impact. However, Russia is also a main supplier of key ingredients for fertilisers, so trade sanctions could affect production elsewhere.

A consequence of the pandemic has been a global shortage of microchips that has caused, amongst other things, new car production to slow. The conflict in Ukraine could also make this problem worse as between them Ukraine and Russia produce 90% of the World’s neon gas, used as laser gas for chip lithography, two-thirds of which is purified by one company in Odessa. There are long-term alternative sources in Africa but that is irrelevant in the short run and here-in lies the problem that can also be applied to the elephant in the room, energy.

As the chart above shows, Russia is responsible for 12% of global oil production and 17% of Natural Gas. The US was able to stop buying Russian energy immediately because the US is in a completely different energy position to Europe as the advent of shale oil and gas has transformed the country into a net exporter of energy. Meanwhile, the UK will gradually phase out Russian oil imports as we only derive around 5% of our gas needs from Russia and about 8% of our oil. Europe, on the other hand, is more heavily dependent on Russia as a source of energy supply. On average around 35% of gas supply in Europe comes from Russia and there simply is no short-term solution to replace this dependence. 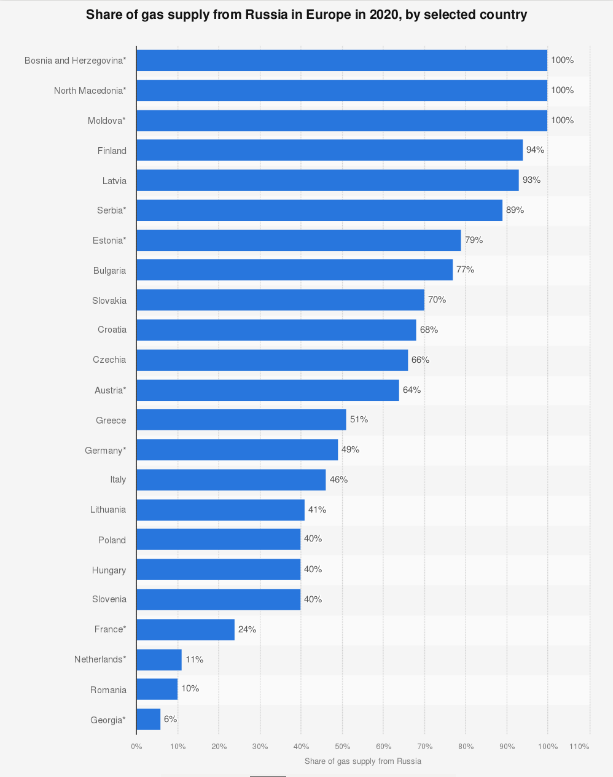 Around 45% (January 2022) of the Russian budget comes from oil and gas revenues so this ban will hurt the funding of the Russian government’s war machine. But it will also cause the price of energy to spike to record levels, push inflation higher, and negatively impact economic growth in 2022, perhaps pushing Europe towards recession. For this reason, we have seen European equity markets extend losses to nearly 20% year-to-date. The short-term winners though have been the equity markets of countries that are net exporters of commodities.in certain countries. Brazil, for example, which exports ?? has seen its equity market rise by over 6% in the same period.

The conflict undoubtedly complicates central banks' strategies to control inflation because the rising price of oil and other commodities exacerbates the same problem of increasing prices that tighter policy aims to address, whilst at the same time growth potential is being threatened which normally calls for a looser policy.  It seems unlikely that the European Central Bank will seek to increase interest rates at this time, but the Federal Reserve in the US have reaffirmed that they are planning to stick to a 0.25% increase this month as the growth impact is likely to take longer to be felt in the US economy.

Our portfolios will not escape negative returns.  However, they are multi-asset and global so elements of them will be exposed to some of the better performing equity markets or less volatile assets and this will smooth the fall.  What world markets need is some positive news, for example if a diplomatic solution can be found then markets will rally. As any chart of global equity markets will show, wars and geopolitical disruption periodically cause volatility and falls in asset classes, but as unsettling as those periods are, the longer-term picture is rarely derailed. We are continuing to monitor and manage the situation as it develops and are on hand to help our clients in these difficult periods. Should you wish to speak to your financial adviser about the recent events please do not hesitate to get in touch.