Capital gains tax, which is payable on the disposal of an asset if the asset has increased in value since it was acquired, doesn’t need to be paid when transferring assets from one spouse to another – due to the spousal exemption – but things can change after a separation.

Spouses are still considered to be living together (and therefore qualified for the spousal exemption), as long as they’ve lived together at some point during the tax year. As such, spouses will be deemed to be living together even if not physically in the same property unless they’re separated through either a court order, a formal deed of separation, or circumstances which indicate that the separation is likely to end up becoming permanent.

Want to know more about the ins and outs of capital gains tax in divorce settlements? Read on for a little more information.

Do you pay capital gains tax on divorce settlements?

Do you pay capital gains tax on divorce in the UK? Any transfer of assets between spouses are exempt from the capital gains tax, so any liability will probably only occur once the process of separation begins – but only after the end of the tax year in which you separate.

If you and your spouse were living together at one point in a tax year, you can continue to transfer assets at any time in the tax year as per the spousal exemption, with no requirement that you’re both living together at the time of the transfer. However, the spousal exemption doesn’t apply after this tax year. After the tax year in which you separated, the transfer of assets between spouses will be considered to be gifts and you’ll be liable to pay capital gains tax. The Government has recently announced that they are consulting to extend the period of time that the spousal exemption can be applied in the case of divorce but no further details are available at the time of writing this article.

Is capital gains tax the same amount for divorce settlements?

If the divorce settlement involves selling the marital home, Principal Private Residence Relief will generally apply – we’ll explain more about this below, or you can find out more about dividing assets in a divorce with our guide.

Will you pay capital gains tax on a marital home in divorce?

Even without the spousal exemption, you will not generally have to pay capital gains tax on the marital home in divorce – assuming one of the two parties still lives there as their main home, under what’s known as Principal Private Residence Relief (PPRR). If they remain in the marital home and have lived there throughout ownership of the house, there will be no capital gains tax liability.

Hence, if the divorce settlement involves a transfer or sale of the family home, you probably wouldn’t need to pay capital gains tax.

However, if you’re the spouse who leaves the marital home, you’ll only be able to claim Principal Private Residence Relief against the full gain if the sale or transfer of the property happens within nine months following the end of the tax year in which you separated. After this nine-month period, the amount of capital gains to pay will depend on what the increase in value – or gain – has been, and the amount of PPRR available, as based on the proportion of time in which you were occupying the marital home.

It’s also worth being aware that if the property is over 0.5 hectares, PPRR will be available to the home and garden only.

Some couples may decide to keep living together during divorce proceedings in a bid for both parties to avoid liability, but this could make proceedings more complicated than they need to be. During a divorce in England and Wales, the court will grant a decree nisi first if it is satisfied that the couple can divorce, and then at least six weeks later a decree absolute, which will actually dissolve the marriage.

However, in practice, the time between the two being granted will usually be longer than six weeks. If over twelve months has passed after the decree nisi was granted, there needs to be a witness statement alongside the application for decree absolute declaring whether or not the divorcing couple had lived together since decree nisi. Should a couple remain living together, they may have to explain why.

Can you avoid paying capital gains tax in divorce?

In theory, you can avoid paying capital gains tax in divorce. Every individual has an annual exemption, so they’re able to make gains without paying tax, as long as they don’t reach the threshold – which can change year by year.

At this point, the disposal of your marital home is unlikely to be subject to capital gains tax – should your settlement involve the property being sold or transferred, Principal Private Residence Relief is likely to apply.
It is not uncommon for divorcing couples to transfer assets which are subject to capital gains tax between them to maximise the use of the annual exemptions if both exemptions are not being fully used; this benefits both parties as it increases the net value of the marital assets being divided.

Make sure, too, that you transfer any assets in the same tax year as you separate, as the spousal exemption will still apply until the end of the tax year. If you were to separate at the start of April, you’d only have a few days at most before the end of the tax year, increasing the likelihood that you’d need to pay capital gains tax, whereas if you were to separate in May, for example, you’d have almost a whole year to transfer and dispose of your assets.

It’s not necessarily going to be easy to avoid paying capital gains tax in divorce, but you may be able to – dependent on timing.

Dealing with the financial aspect of divorce isn’t always easy, but we can help with your financial planning. You can get in touch with us online to arrange a free initial consultation. 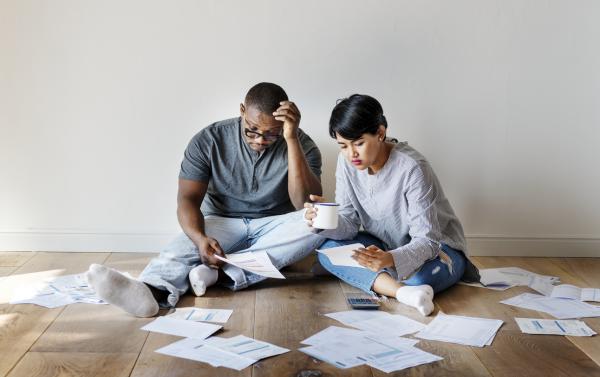